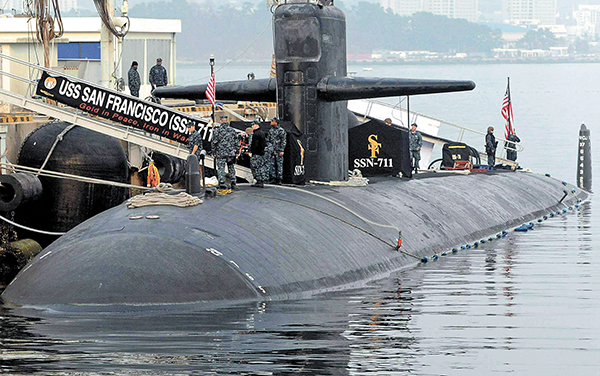 Los Angeles-class nuclear submarine USS San Francisco SSN-711 anchors yesterday at a naval base in Jinhae, South Gyeongsang. It is the first time for a U.S. nuclear ship to be sent to South Korean waters since 1994, after the North withdrew from the Treaty on Non-Proliferation of Nuclear Weapons in 1993. [Joint Press Corps]


JINHAE - In anticipation of a nuclear test by North Korea, a U.S. nuclear warship has been sent to a South Korean naval base for an upcoming joint military exercise.

Starting Monday, Korea and U.S. will conduct a joint military exercise in the East Sea.

For this exercise, several South Korean Aegis destroyers called King Sejong, 7,600-ton warship, will be mobilized as well as a 214-ton submarine. The U.S. Navy will send a 9,800-ton Aegis destroyer Shilo and a 6,900-ton nuclear submarine San Francisco.

Long-range, subsonic Tomahawk cruise missiles are mounted on the U.S. Aegis destroyer and nuclear submarine. With a range of 2,500 kilometers (1,553 miles), the missile can target anywhere in North Korean territory.

The missile is also known as “a spear” in the U.S. military, because of its capability to devastate core military facilities in enemy territory from a far distance in the early stage of a war. The U.S. military reportedly used a total of some 1,900 Tomahawk missiles in the battlefields of Afghanistan, Serbia and Iraq. 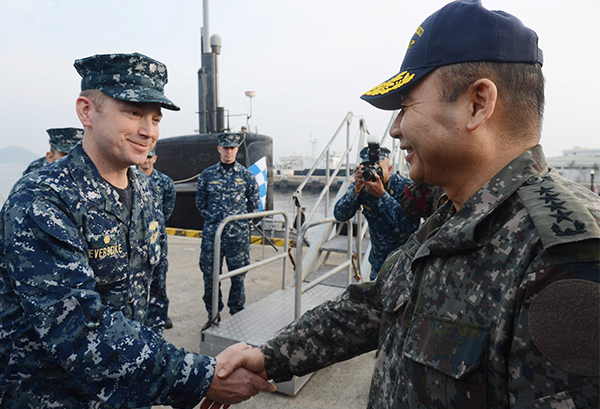 
Jung Seung-jo, chairman of South Korea’s Joint Chiefs of Staff, paid a visit to the naval base in Jinhae, South Gyeongsang, where the U.S. nuclear submarine is mobilized. A group of reporters also accompanied Jung, an unusual case for the U.S. military that is reluctant to show its core weapons. Still, the U.S. covered the entrance to the submarine for security reasons.

The U.S. nuclear submarine has been mobilized in South Korean waters for the first time in 19 years since 1994, after the North withdrew from the Treaty on the Non-Proliferation of Nuclear Weapons in 1993.

It can operate underwater until the crew runs out of food.

The San Francisco warship is an early model of 62 Los Angeles-class warships in the U.S. Navy. The 6,900-ton warship is 110.3 meters (361 feet) long and 10.1 meters wide, a large submarine given the fact that South Korea’s largest submarine is 214 tons.

The U.S. nuclear submarine has three floors. The top floor includes the operation control room and the captain’s cabin, the second has cabins for crew members and a restaurant, and the bottom houses the torpedoes and diesel engines.

Reporters entered the submarine, after taking the ladder down, and went into the operation control room. It had a periscope, a firepower control device and sonar equipment to navigate, while controlling torpedoes and missiles.

The restaurant on the middle floor was for crew members and sailors, equipped with juice and coffee machines. Jung advised the sailors “to take a break until the exercise.” The crew members say the restaurant offers four meals a day and can accommodate 24 people.

The 140 crew members are sharing 99 beds. In an around-the-clock underwater operation, a third of them are working while the others are sleeping.

The MK 117 torpedo, mines and Tomahawk missiles are all housed in the bottom level.

The captain said the submarine contained a number of weapons but did not elaborate.

The warship can purify seawater into drinking water, and the process creates oxygen that provides fresh air to the crew.

Both Korean and U.S. military officials say this is a rare joint military drill.

Authorities didn’t report on its schedule to journalists in advance, fueling speculation that the drill could be a form of saber-rattling in reaction to the North’s nuclear test plan.

“Through this joint military exercise, we will be able to deliver a message to North Korea that if they engage in a defiant act, it won’t be tolerated,” Jung said.