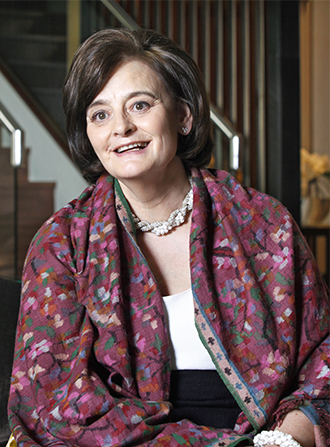 But as many developing nations are rapidly aging, she added it is important for communities to enable women to balance their families and their careers.

“I myself am the product of someone whose life has been transformed by education,” Blair, who serves as the first chancellor of the Asian University of Women (AUW) in Chittagong, Bangladesh, told the Korea JoongAng Daily in an interview on Thursday at the Millennium Seoul Hilton Hotel in central Seoul.

“I was born into a very ordinary family in Liverpool. Nobody in my home, my family, had been to university before I went to university in 1972.”

“Over 90 percent of [AUW] students are like me, the first in the family to go to university,” she added.

She studied law at the London School of Economics and is the first working wife of a British Prime Minister.

When her husband took office as Prime Minister at the age of 43, she continued working as a lawyer.

She was in fact was the first Prime Minister’s spouse to have a college degree, including former Prime Minister Margaret Thatcher’s husband Denis Thatcher.

Over 500 students for 12 different countries, including Cambodia, Pakistan, Nepal and Sri Lanka, attend the Asian University of Women, which was founded in 2008. The university offers a U.S.-style English education that emphasizes debate and communication.

A longtime human rights and gender equality activist, Blair said, “What we aim to do is not only to give them confidence and an education, but help them become leaders in their communities. Some of them actually want to be politicians. Some of them want to be lawyers, engineers, or social workers, educators.”

Many of these young women, said Blair, are able to attend through funding support from the school. Several come from religious or cultural backgrounds and their families allow them to attend the school because it is a women’s college.

They are taught public speaking and communication skills and are provided further study and internship opportunities across the world.

“When I first became a lawyer in 1976, it was the first year that women entering my profession went over 10 percent,” said Blair. “Even though in fact I was the top student of my year, it was very difficult for me to find a job because people would say in those days, ‘well, we don’t take women.’?”

She was oftentimes mistaken as the secretary, she added.

The Export-Import Bank of Korea agreed to accept three interns from AUW beginning in June for the next three years.

Ewha agreed to faculty and student exchange, as well as scholarship opportunities for graduate studies. Blair stated that Korea, as a developing nation that transformed into a developed nation, is a prime model to show students the possibilities of education.

She pointed out that Park Geun-hye, as Korea’s first woman president, is about to take office.

Blair added that much investment goes into the education of young women who excel in schools, examinations and recruitment.

“Firms are beginning to realize that to make sure that investment pays off a long term investment, they need to adjust working practices to enable young women to both have a career and to have children, and not to feel guilty or inadequate or feel that because they got children they’re regarded as somehow not having the same kind of commitment.”