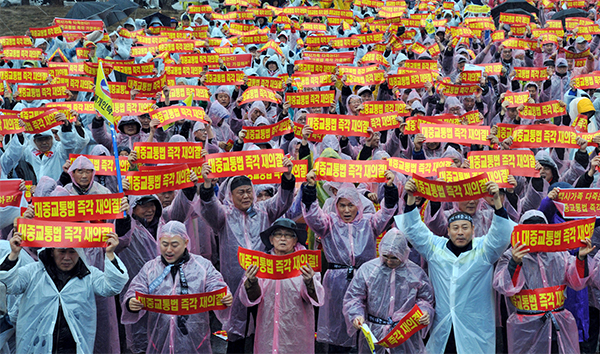 Taxi strike ­- Members of the taxi industry in the Jeolla region rally yesterday in front of the Gwangju train station, in Gwangju, demanding the National Assembly pass the taxi bill, which was vetoed by President Lee Myung-bak and now tossed back to the Assembly. The bill would designate cabs as mass transportation if passed by lawmakers. Ratcheting up their efforts to realize their demand, taxi companies in the Jeolla and Gyeongsang regions went on a single-day strike yesterday. According to the Ministry of Land, Transportation and Maritime Affairs, 8,778, or 9 percent, of 96,465 taxis joined the strike as of 1:00 p.m. yesterday. [NEWSIS]