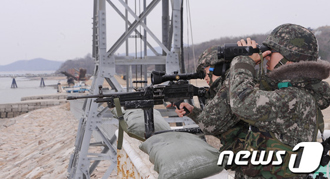 Tensions are running high in Seoul, Washington and Beijing over what looks to be preparations for North Korea’s third nuclear weapons test.

The three countries are preparing their own measures in the event of the defiant military provocation. There are several indicators the test is imminent.

Pyongyang covered the entrance of an underground mine at a test site in Punggye-ri, in the northeastern tip of the country, yesterday, a South Korean intelligence official told the JoongAng Ilbo.

“Just like the December rocket launch, they are trying to hide their final preparations for a nuclear test,” the official said.

Unification Minister Yu Woo-ik said at a meeting with senior officials that “a third nuclear test could be the final stage of the regime in its nuclear weapons development program. The situation is very serious.”

Chuck Hagel, the U.S. president’s nominee for secretary of defense, said on Thursday at a Senate confirmation hearing that “North Korea is beyond a threat. It’s a real nuclear power and quite unpredictable.”

In a written response submitted before the hearing, he introduced the idea of levying stronger sanctions against Pyongyang than the newly-approved resolution by the UN Security Council members recently.

For instance, he proposed prohibiting all North Korean airplanes and vessels suspicious of carrying banned items.

A diplomatic source in Beijing told the JoongAng Ilbo that “the Chinese authorities are viewing North Korea’s nuclear test as a serious concern and reviewing a variety of measures to be taken after the test.”

“The most likely measure by China would be probably trimming the amount of aid provided for North Korea, which will cause Kim Jong-un’s regime difficulties in pushing forward with his economic reform plans,” the source said.

Since the defiant long-range rocket launch of Unha-3 in December 2012, China tightened up customs on travelers and cargo entering North Korea.