Loss of a treasured sewing needle inspires a children’s delight

Loss of a treasured sewing needle inspires a children’s delight 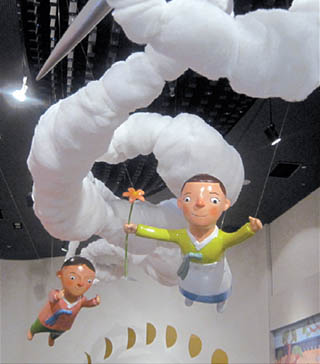 The latest exhibition at the Kokdu Museum adds fantastical elements to the Joseon-era essay “Jochimmoon.” Provided by the museum

In “Jochimmoon,” a classic essay from the early 19th century, Lady Yun laments the breaking of her sewing needle as if she were mourning the death of a longtime friend.

Although little is known about the author, her writing, including the symbolism, metaphor and word choice, is considered so exceptional that it has been published in history textbooks.

Inspired by the story of the needle, Kim Ock-rang, the director of the Kokdu Museum (formerly Kkokdu Museum), wrote a play in which she added some more fantastical elements.

“[The play] has fantastical elements like astronomical phenomenon and a solar eclipse, so we tried to transform our exhibition hall into a new, mysterious world,” said Lee Min-hee, one of the museum’s spokesmen. “The exhibition will feature drawings, installations and videos, and it will likely appeal more to children.”

Korean museums have been increasingly focused on education in recent years, and the Kokdu Museum is also keen on exhibitions that have an educational touch. It is one of the few private museums in Korea that has hired educators in addition to traditional curators.

Lee added that Kim’s play will be published as a children’s book in May.

Overall, this year appears to be a busy one for the Kokdu Museum as it plans to hold exhibitions in three European countries: Belgium, Germany and Hungary.

These events are in addition to its permanent exhibition of kokdu, or wooden figures used to decorate funeral biers that were used to transport coffins to ancestral burial grounds during the Joseon Dynasty (1392-1910).

Kokdu come in various forms, including clowns, acrobats, guards and maids as well as imaginary and symbolic animals like phoenixes and dragons.

Kim, who is also head of Dongsoong Art Center and Ockrang Cultural Foundation, collected about 20,000 kokdu.

Of these, 200 are in the permanent exhibit in the museum’s main Daehangno branch and 55 are on display at the Bukchon branch that opened in November.

The museum is close to exit No. 1 of Hyehwa Station, line 4.