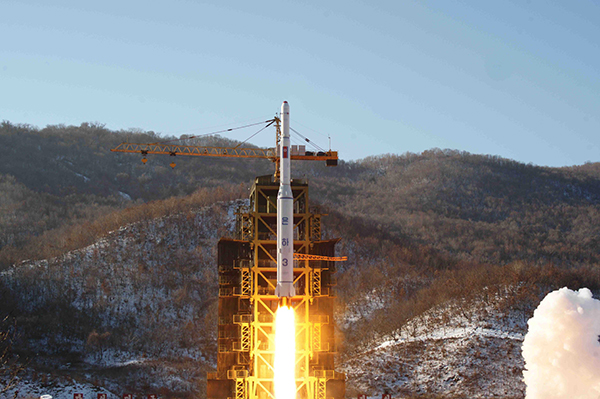 Stop me if you’ve heard this one before. North Korea decides, for whatever reason, that it is time to once again challenge the international community by conducting missile and nuclear tests. It announces a “satellite launch” and then proceeds, despite international condemnation and warnings of dire consequences, to test its long-range missile capabilities. The United Nations Security Council then debates the issue, with the Unite States and South Korea (among others) arguing for tougher sanctions while the Chinese insist on a “prudent” response. Finally a watered down UNSC statement or resolution is passed, to which the North Korean take great affront, promising in response to conduct another nuclear test (which had been planned all along) and to “punish” any country (but especially South Korea) that dares to enforce UNSC prohibitions.

Yes, we have seen this play before. The only difference this time is, given the spectacular failure of the rocket launch in April 2012, Pyongyang saw the need first to conduct a follow-on launch (which it did successfully in December) before moving on to the next act. Meanwhile, the rest of us sit and watch the drama unfold despite knowing how it will play out. Perhaps it’s time to be proactive and try to change the ending, or at least make it clear what the consequences of such aggressive behavior will be.

What should we do? The UNSC needs to meet now and determine, in advance, what sanctions it will apply if another nuclear test is conducted. This should include both a tightening of trade prohibitions and the institution of financial sanctions that will limit Pyongyang’s ability to purchase or proliferate missile and nuclear technology abroad. It should also include enforcement mechanisms. The UNSC should also specifically condemn threats made by the DPRK against any United Nations member that is carrying out its sworn duty to obey and enforce UNSC resolutions.

Additional unilateral actions by Washington, Seoul and Tokyo will likely be considered, but the real “enough is enough” message must come from Beijing, given both its past role in shielding the North from suffering any real consequences as a result of past violations and the simple fact that constantly defending Pyongyang’s actions is causing severe damage to China’s international image and reputation. Here’s what Beijing should do to send a message to the new leadership in Pyongyang that its confrontational policies will no longer be tolerated.

First, it should announce that another nuclear test will result in a Chinese decision to join the U.S.-led Proliferation Security Initiative, in order to actively prevent Pyongyang from importing or exporting nuclear and missile technology. Second, it should announce that it is changing its (indefensible) policy of repatriating North Korean refugees but will, instead, give those fleeing the North in the future free passage to a third country of their choice. Third, instead of calling on “all sides” to remain calm, it should specifically condemn threats made by the North against the South or any other country.

Chinese authorities assure me that they have privately urged the North to refrain from such provocative behavior, but it is clear that such private interventions are falling deaf ears. Chinese concerns, like those of the rest of us, are continually being disrespected by Pyongyang. It does not fear the consequences of its aggressive behavior because thus far there have not been any that have mattered. Previous sanctions have clearly not been adequately enforced, or the North would not have been able to conduct not one but two missile tests last year. Obviously, more needs to be done.

Instead of waiting for the next act to unfold, it’s time for Beijing and the UNSC to be proactive. Perhaps this can prevent the test from occurring. If it does not, then Pyongyang will have no one but itself to blame for the consequences that follow.

*The author is president of the Pacific Forum CSIS, a Honolulu-based nonprofit research institute affiliated with the Center for Strategic and International Studies in Washington.

by Ralph A. Cossa