Outflow of wages tops the inflows

Outflow of wages tops the inflows 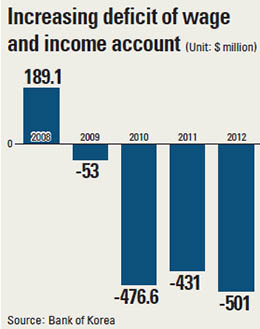 According to the data by the Bank of Korea, income earned by foreign workers in Korea came to about $1.15 billion last year, down 2.8 percent from a year earlier. Income earned by Korean workers abroad shrank 13.8 percent on-year to $647.1 million.

As a result, the country’s wage and income account shortfalls came to $501.8 million last year, which was up 16.4 percent from the $431.1 million a year earlier.

This marked the fourth consecutive year of wage and income account shortfalls since 2009. It also represented the largest deficit, renewing the all-time high registered in 2011.

“Due to the global economic slump, the number of Korean people working in foreign countries declined and their wage and income levels got worse, but payment to foreign workers here has been on the steady rise, which seems to have resulted in the widened deficit,” a central bank official said.

A sharp increase in the number of foreign residents here is also playing a part. Statistics showed that foreigners staying in Korea more than doubled to 1.39 million in 2011 from 629,000 in 2002.