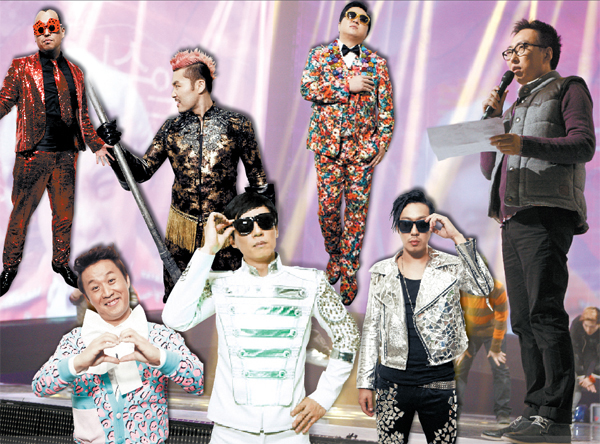 An EP released by Park Myung-soo, right, for his “Infinite Challenge” co-stars has prompted controversy over television networks’ role in the K-pop industry. [JoongAng Ilbo]

When comedian Park Myung-soo composed the song “Gangbuk Dandy” for his friend and “Infinite Challenge” member Jung Hyung-don, he probably wasn’t expecting it to reach No. 1 on charts nationwide.

He was also likely surprised by the intense backlash he faced from the high-powered Korea Entertainment Producers’ Association.

Park’s comic song, one of six written by the funnyman for his co-stars on his variety show, hit all the right notes with the public. Full of witty lines and cheesy beats, the title track has similarities to Psy’s signature tune, albeit centered on a fashionista from north of the Han.

But the popularity seemed to matter little to the music association, which seemed to grow only more irritated as the EP steadily climbed its way to No. 1, giving top contenders like Girls’ Generation a run for their money.


Dealing with the competition

In an industry well-known for its versatile players, KEPA seemed to take a step out of the mainstream - and made a point of doing so.

“It was unfair to use the leverage of a TV network to promote a song,” the organization blasted in a statement. “The phenomenon is akin to the hold that conglomerates have across various industries.”

The industry group seemed suddenly unsettled by the success of a short album completely created and promoted by a television personality.

It further voiced fears that “major disruptions” to the music production process could damage the worldwide image of Hallyu.

When asked to clarify, a spokesperson from KEPA ran through a list of concerns about the new EP, including presenting K-pop in a trivial light and threatening the jobs of musicians who work behind the scenes for months for a crack at the charts.

The stance made little sense to Park, who defended himself at a press event last month.

“It makes no sense to me to go on about labeling music as high or low quality,” he explained. “It only matters that the public likes it. After all, it’s for them that music is made.”

An undeterred Park added that he’ll likely take up DJing in the near future.

Although the comedian’s recent run-in with the music organization has brought the issue to the forefront, albums endorsed and promoted by television networks are common in the industry.

Park has previously released songs in collaboration with G-Dragon on the same show, and of course, television is full of shows aiming to profit from songs.

Last year, “Gag Concert” on KBS released a few songs sung by its comedians, one of whom was a stuffed character named Brownie.

Still, KEPA insisted that there are more inherent problems about what it sees as an intrusion of television personalities into the music scene.

“We are not having a dig at the show ‘Infinite Challenge’ or MBC for that matter,” said a spokesperson from KEPA. “We are expressing our opinion that it is unfair for some entertainers to get extra coverage on the networks and flood the music market by using their popularity as leverage.”

It further insisted that a blurring of the division between the television and music industries would be detrimental for up-and-coming artists trying to break into the music scene.

“In Korea, variety shows are huge, and those who are able to promote their songs on air have an immediate advantage while lesser known artists struggle to book appearances,” the spokesperson said.

Yet despite its pleas, most music insiders seem to be standing by Park.

For Yang Hyun-suk of YG Entertainment, a label represented by KEPA, the so-called division between the television and music industries seemed completely contrary to today’s reality.

“According to KEPA’s logic, singers shouldn’t appear on variety shows, which is clearly not what’s happening,” he said to OSEN. “Whether something is a hit or not lies with the public. It’s not up to any organizations or producers to call the shots. If professional singers are losing out to comedians on the charts, then really we should be asking ourselves ‘What we are doing?’?”

Popular music critic Cha Woo-jin was also of the belief that KEPA’s worried predictions will not likely come to pass.

“Park isn’t really stealing someone else’s spot,” said Cha, who thinks that if it wasn’t for the professional comedian, there would be some other song of similar quality filling its spot on the charts. 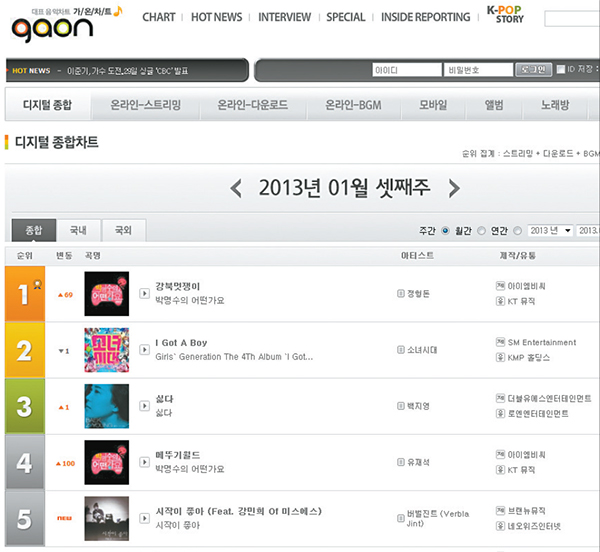 “Gangbuk Dandy,” produced by Park Myung-soo, was No. 1 on Gaon Chart in the third week of January. [Gaon Chart]

And official figures point to the speed at which some tracks move up and down in the charts, competing with work from across the industries.

“On average, these songs only manage to stay on the charts for about two to three weeks after the shows stop airing,” a spokesperson explained.


The nature of the music industry

Cha added that KEPA seems to be overlooking an important factor about the very industry it oversees: most songs these days top charts thanks to associated imagery or video clips anyway.

So the fact that Park’s song was supported by visual media is really the norm rather than the exception, he asserted.

“It’s obvious that people don’t like songs for just its music component,” he said. “I don’t see what ‘Infinite Challenge’ is doing as a new thing at all.”

Indeed, K-pop’s international superstar Psy made it to the world stage because of his YouTube hits.

K-pop has a reputation for entertainers who dabble in this and that; it’s hard to find an actor or actress who has not contributed to a soundtrack or released a “mini album” at least once. And as it stands, most idol singers can claim to have at least one hit-drama under their belt.

This is the industry where if you make it big, you can expect to land 15 product endorsements in the same year.

One such well-rounded entertainer, Jung Yong-hwa, said he felt the industry is big enough for everyone.

“As a singer-songwriter I don’t have a problem with Park Myung-soo’s music,” the leader of CNBlue told reporters at the height of the controversy over the “Infinite Challenge” song. “There’s a different genre to suit everyone.”

Every member of the boy band, including Jung himself, has appeared in at least one drama in recent years.

Critics of KEPA’s tough stance assert that, above all, entertainment should be about what listeners - and viewers - want.

So for them, the debacle involving Park, KEPA and the networks really boils down to one issue: what do the listeners want?

“If you start pointing the finger, then surely it is the masses that the critics are dissing, because these are the people buying the songs,” Cha said.