For many, daily repayment of loans just feels better

For many, daily repayment of loans just feels better 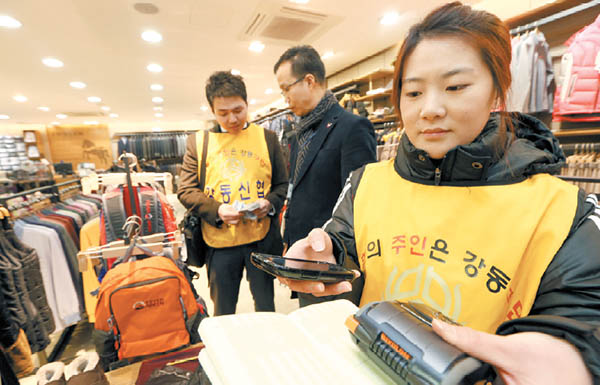 A worker at the National Credit Union deposits a store owner’s loan payment at a traditional market in eastern Seoul. By Oh Jong-taek

Choi Hyung-mun, who runs a small clothing store in Amsa-dong, southeastern Seoul, hands 71,000 won ($64.70) to an official from the National Credit Union Federation of Korea, who wears a yellow vest and carries a black bag full of cash.

“I have prepared it for you,” Choi tells the official fondly as she punches the payment into her smartphone and prints out a receipt for Choi through a mobile printing device.

Choi, who took out a one-year, 20 million won loan from the credit union 10 months ago at an annual interest rate of 13 percent, pays back a little of his principal and interest every day.

“After my sales shrunk due to the economic slowdown, I couldn’t even dare to apply for a loan from a bank,” says Choi, “because I’d have to pay back a large sum every month.

“Although the interest rate is a bit higher, I decided to take a loan with daily repayments as it feels like it’s more manageable.”

More than 250 merchants around Amsa-dong have borrowed through a loan program issued by the National Credit Union Federation of Korea that allows daily repayments.

“An increasing number of people have applied for daily repaying of loans, saying their sales are not as good as before,” said Jeon Seong-ik, a manager of the National Credit Union Federation of Korea’s Gangdong branch in southeastern Seoul.

“It’s giving us a bit of a headache because we have limited resources.”

Loans with daily repayments used to be the province of hard-knuckled private lenders who charged outrageously high, illegal interest rates to desperate borrowers. They’ve been reborn as a legitimate financial product offered by local credit unions and even banks.

Thanks to a crackdown by the financial watchdog, rip-off private lenders - charging up to 300 percent interest - many have disappeared from the scene.

Realizing there was a demand for daily repayment loans, legitimate financial entities started offering them at legal and reasonable interest rates.

The amount of daily repayment loans totaled 165.8 billion won last year, 2.5 times more than 67.5 billion won in 2011. Credit unions have been especially keen on the products for merchants near their regional offices. They charge yearly interest rates of around 18 percent.

In the banking sector, Daegu Bank took the initiative in introducing a daily repayment loan product with an average 8.1 annual interest rate. It lent 3.9 billion won to merchants at traditional markets.

The larger Korea Exchange Bank also started offering the loans. Since September, its customers have borrowed 92 billion won in such loans with an average 6.5 percent annual interest rate. Most borrowers are owners of small stores affiliated with credit card companies.

The biggest factor for the borrowers is that every payment is small.

A restaurant owner in Amsa-dong surnamed Kim says he uses a small part of his 200,00 won daily sales to make the payment.

Also, approval for such loans is fast and simple. All the borrower needs is to prove his or her identity and the amount of sales for their places of business. Approvals come in a day or two.

“I couldn’t wait a month to know if I’m eligible for a loan when I don’t have money to pay my suppliers,” said Lee, a 42-year-old restaurant owner in the Gildong market in southeastern Seoul. “So I applied for the daily repayment loan.”

However, there are restrictions.