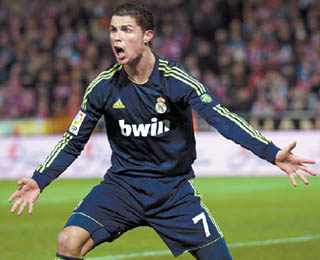 MADRID - Cristiano Ronaldo scored the first own goal of his career to send Real Madrid to a shock 1-0 defeat at lowly Granada in La Liga on Saturday, further damaging their already slim hopes of retaining the title.

Ronaldo has scored 21 league goals this season but headed into his own net at a corner in the 22nd minute, leaving and his side rarely threatened in the face of resolute opposition.

The result left the champions 15 points adrift of leaders Barcelona, who can extend their advantage over their great rivals to 18 with a win at Valencia on Sunday.

Real have 43 points from 22 games and remain four points behind second-placed Atletico Madrid, who host Real Betis on Sunday.

“We played a bad game, the responsibility is mine,” Real coach Jose Mourinho told a post-match news conference.

“The result bothers me. The first half was horrible, and although we improved in the second half, it wasn’t enough.

“Granada defended with heart and soul, and a lot of motivation, and it was a great night of football for them.”

Wednesday’s King’s Cup semi-final first leg at home against Barca, when Real recovered to grab a 1-1 draw, seemed to have taken its toll as Mourinho’s side struggled to get going. Real have now lost five games on the road this season, four of them in Andalusia after setbacks at Sevilla, Real Betis, Malaga and Granada. The other one they lost at Getafe.

In England, Wayne Rooney’s hot scoring streak continued on Saturday as he fired Manchester United 10 points clear in the Premier League title race with the only goal in a 1-0 victory at Fulham.

Overshadowed by Robin van Persie this season, Rooney showed his predatory instincts after 79 minutes at Craven Cottage when he punished a defensive error to grab an unconvincing win that turned up the heat on Manchester City who play on Sunday.

Faltering European champions Chelsea suffered their second late collapse this week, going down 3-2 at Newcastle United having led 2-1 with goals from Frank Lampard and Juan Mata.

Manchester United have 62 points from 25 games with Manchester City on 52 and Chelsea on 46.

Despite a yawning gap at the top, Rooney said the title was far from being in the bag.

“We’re in a good position but we’re not getting carried away,” he told ESPN. “Let’s see where we are with three or four games to go.”

United were not at their best and had an escape in the first half when Fulham’s Brian Ruiz hit the inside of the post with a volley, although they carved out plenty of chances and Patrice Evra and Rooney were both denied by the woodwork.

A scrappy second half came to life late on when Fulham defender Philippe Senderos misjudged a high ball and Rooney raced clear to put United in front. Van Persie was needed at the other end to clear a Senderos header off the line as United hung on for their 20th league victory of the season. Reuters