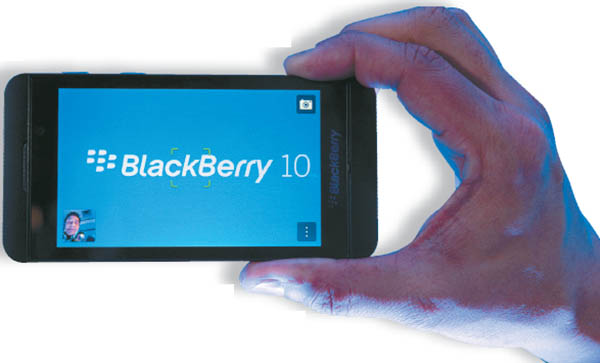 The new BlackBerry comes full of new features that its Canadian producer hopes will bring it back from the brink of irrelevance. [AP/YONHAP]


BlackBerry has done a lot right with the Z10, the first smartphone to run its new, bet-the-ranch operating system.

The touchscreen phone is handsome, intuitive to use and a whiz at multitasking.

The key question, which the market will answer, is whether all that will be enough to rescue the company after years of mediocre products and corporate floundering.

At first glance, the Z10 could be an iPhone 5 clone - same rounded corners, thin side bezels. On closer examination, though, differences become apparent.

The Z10 has a slightly bigger screen - 4.2 inches versus the iPhone’s four inches - and is a bit taller, wider and thicker. It’s also a little heavier, though by no means uncomfortable.

On the front, there’s no physical button to interrupt the smooth black rectangle; the textured back pops off to reveal a user-replaceable battery as well as a MicroSD slot to augment the 16 gigabytes of included storage.

The Z10 goes on sale first in the United Kingdom, Canada and United Arab Emirates. It isn’t due to show up in the United States until March.

The new operating system, called BlackBerry 10, differs from Apple’s iOS and Google’s Android in its greater use of finger swipes rather than just taps on icons to move around the interface.

The central feature is the BlackBerry Hub. It’s a universal inbox that encompasses not just your e-mail accounts but also texts, updates from Facebook and Twitter, messages from the BlackBerry Messenger service, and other sources.

You access the Hub from within virtually any application by sliding your finger up and to the right from the bottom of the screen. When you do, the screen you’re on slides to the right, giving you a peek at the Hub inbox underneath.

If you don’t see a message you want to interact with, slide your finger to the left and resume whatever you were doing. If you see something that requires your attention, keep sliding to the right and the Hub expands to fill the screen.

Best of all, you can respond from within the Hub app. There’s no need to launch a separate e-mail, Facebook or Twitter client.

When you’re tapping out a message, multiple possible words appear on screen; all you have to do is flick the right one into place with the swipe of a finger. Multilingual users may appreciate that the keyboard dictionary can handle up to three languages simultaneously.

Other features impress as well. The eight-megapixel camera includes a feature called TimeShift that lets you adjust individual components in a photo to assure that, for instance, everyone in a group shot has their eyes open. And a near-field communications chip gives the Z10 the same tap-phones-to-share-content ability that Samsung is promoting heavily in its Galaxy S3.

On the other hand, the BlackBerry 10 operating system will have many fewer apps available - about 70,000 in total according to the company - than the iPhone and Android, which have hundreds of thousands.

BlackBerry also says the Z10 battery will run a full day in normal use. I couldn’t get a good read on just what that meant because a bug on my test device caused the battery to discharge when the phone was idle. The company says it’s a known issue that will be fixed before the Z10 reaches customers.

I also wasn’t able to test one of the new operating system’s key features for corporate users, called BlackBerry Balance, which sets up separate identities for your personal and work lives.

The idea is that when your phone is in personal mode, anything goes. Flip to work mode, though, and your environment is determined by your company

Features like Balance suggest that you may be as likely to be handed the Z10 by your company as to buy it yourself. Either way, you won’t have to wince at the prospect. Bloomberg