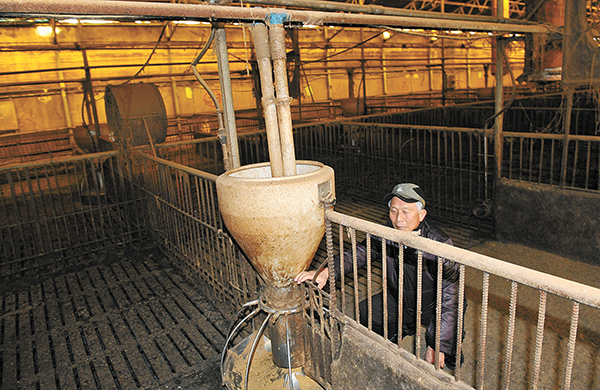 Hong Kyung-ki looks around the empty pens he used to own in Gwangseok-myeon, Nonsan, South Chungcheong. Hong closed his business after selling off his 2,200 hogs at the end of last year as the falling price of pork caused him to incur too much debt. By Kim Sung-tae

NONSAN, South Chungcheong - With the price of pork crashing, only 6,000 farmers are raising hogs in Korea, half the number that were five years ago.

And the country’s Pork Board says they will be driven to the verge of bankruptcy if the current price, far lower than the cost of production, continues.

However, the hog population, which had been 8.8 million in 2011 after the outbreak of foot-and-mouth disease, increased to nearly 10 million.

At a hog-raising complex in Gwangseok-myeon, Nonsan City, South Chungcheong, incoming vehicles are fumigated against the disease at the entrance. The complex itself was shrouded in fog. 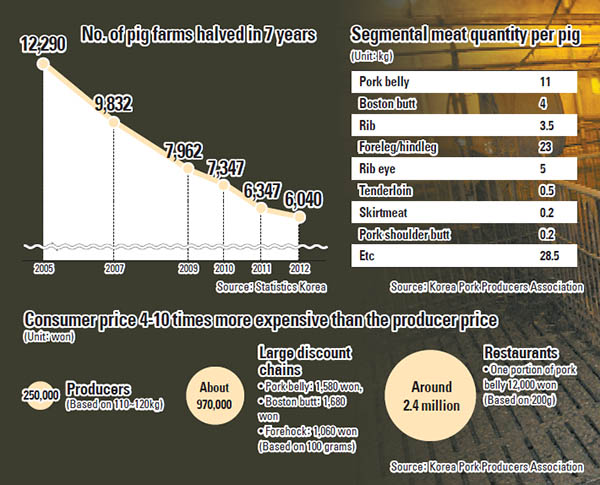 Hong Kyung-ki, 76, who closed his business after selling off his 2,200 hogs at the end of last year, showed a visitor around empty pens.

“I used to raise hogs with my son, but with several million won in deficits every month, I could not keep going,” said Hong. “Now, I just cultivate vegetables, but I don’t know what to do with my son, who just lost his job and will have to live with the debt.”

Next to Hong’s pen, a 36-year-old surnamed Chung also said he recently sold his 3,000 hogs and pen to a feed manufacturer.

“My job is the same now and then, but the difference is that now I am working as salaried employee at the feed company,” he said.

“I tried to keep my pen by taking out a loan from Nonghyup (the National Agricultural Cooperative Federation) and even private loans at high rates, but the more I sold the hogs I raised, the more debts I saw.”

“Every time a hog farmer raises and sells an animal, the farmer sees an average of 100,000 won of deficit,” said Chung Sung-hyun, managing director at the Korea Pork Producers Association. “After the pork price did not even meet the cost of production, the majority of farms became saddled with debt.”

However, the pork price has continued to fall since last May and is not showing any sign of recovering.

Last year the price fluctuated, slightly rising during the summer holiday season when pork belly consumption increased and at Chuseok before faltering.

According to the Ministry for Food, Agriculture, Forestry and Fisheries and the Korea Pork Producers Association, the optimum domestic hog population is about 9 million. However, the recent hog population in the country stands at 9.91 million.

Korea’s hog population is growing because large food companies and feed manufacturers are taking over hog farms from individuals like Chung in Nonsan and large well-known operations in Cheonan and Seosan, South Chungcheong.

“Pork prices quickly plummeted and individuals lacking sufficient funds seem to have been driven into the critical situation,” said a feed company official. “However, for large companies the situation is also similarly bad, as it is difficult to cut the costs.”

When foot-and-mouth disease broke out, large-scale investment by some individual farmers in unaffected areas has also contributed to the increased number of hogs.

“The farms that made a lot of money because of the disease by investing a lot in unscathed areas greatly increased the number of sows and the volume is now pouring in,” said the Pork Board, association of hog farmers.

In order to raise pork prices, farmers are reducing the number of sows and reducing the hog population by region. However, the industry says nothing will increase prices like higher demand.

“The domestic consumer only wants to eat pork belly, which is less than 10 percent of a hog,” said Choi Sung-hyun, director of the Pork Board. “We hope that the consumption of tenderloin, rib eye, foreleg and hind leg, which are generally more nutritious than pork belly, will increase.”

In addition, the hog farm industry claims that increasing the supply of pork is hindered by a complex and costly distribution system that increases costs to consumers.

Pork that costs 250,000 won to produce costs 970,000 won to 2.4 million won when purchased at discount retail chains or restaurants.

“The production price fell by almost half last summer, but the price of pork belly at restaurants stayed at 12,000 won per 200 grams,” said Chung of the Korea Pork Producers Association. “I don’t understand how the pork belly price could stay the same, while production prices kept declining.”