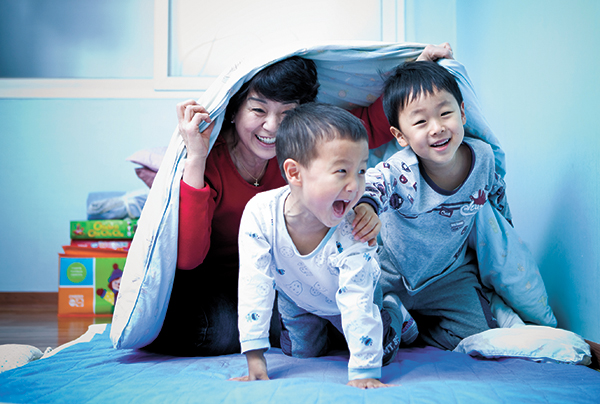 A 56-year-old nanny, Jang Yeong-sun, plays with the two boys she has taken care of for the past three years. Jang is ethnic Korean-Chinese. She does household chores, cooks and even teaches the kids in a three-bedroom apartment in Gangnam District, southern Seoul. By Kwon Hyuk-jae


“Auntie, can we watch TV?” asks 7-year-old Jae-won, calling out to his nanny, trailing after her like a duck around his bedroom.

His 56-year-old nanny, Jang Yeong-sun, is an ethnic Korean-Chinese who came to Seoul from Jilin in northeastern China in November 2009.

Jang is a live-at-home nanny and looks after Jae-won and his younger brother Shi-won in a three-bedroom Gangnam District apartment in southern Seoul.

She handles household chores, cooks, teaches and plays with the boys and even sleeps in the same room.

The children’s bedroom has bookcases lined with books and toy boxes. Jang keeps her clothes folded neatly in a box with her cosmetics.

On one wall is a chart with Chinese characters, and the end of the room is stacked with English story books.

She repeatedly appeals to the children by saying “We have to study this today, but after we finish, we can watch TV.”

The boys’ father works at an international bank. He leaves for work early in the morning and comes home late at night. Their mother, an office worker, also often works late.

Jang’s day, however, is not all babysitting and work. Jae-won goes to a day care center for half the day, and when she picks him up at 4 p.m., she catches up with her fellow Korean-Chinese nannies.

Some 30,000 families opt for nannies to look after their child. Many of these nannies are ethnic Koreans from China.

Of these ethnic Korean-Chinese residing in Korea, “Some 54,000 are ‘caretaker workers’ working as nannies or caregivers,” said Lee Hye-kyung, a professor at Pai Chai University.

These often have limited Korean language abilities but are cheaper than Korean nannies. They became popular in the 1990s.

“In the morning, many people waiting with kids that are to be picked up by the day care center buses are mostly like me, ethnically Korean-Chinese,” said Jang.

In the 1960s and 1970s, families hired Korean sikmo, or live-in housekeepers, who took care of the children and did household chores. Most of these sikmo were young, single women in their 20s from the countryside.

This changed in the 1980s as these 24/7 live-in sikmo were replaced with pachulbu, or visiting part-time housekeepers, who were paid by the hour.

These pachulbu were mostly married middle-aged women in their 40s and 50s living in cities.

By the 1990s, as more households had both spouses working, hiring ethnic Korean-Chinese, who were cheaper and spoke some Korean, became a popular option for middle-class, working families.

And as formal diplomatic relations between China and Korea were established in 1992, visas became easier to obtain and more female ethnic Korean-Chinese moved to Korea.

A large number of the ethnic Korean-Chinese nannies come from the border region along the North Korean border, where many ethnic Koreans live and preserve their Korean customs and language.

Lee Song-ee, a Dongguk University professor, said, “Hiring ethnic Korean-Chinese nannies has become a feasible alternative for households with both parents working, because they are cheaper than hiring a Korean, while communication with them is still easy.”

Lee Su-yeon, a 36-year-old mother of two toddlers from Bundang, Gyeonggi, said, “I would love to raise the kids myself, but I cannot give up my working career while they grow up.

“I considered using a Korean nanny but could not ignore the cost difference.”

The number of Chinese of Korean descent residing in Korea increased from 328,621 in 2007 to 459,616 last year, according to the Ministry of Justice.

They comprise the highest proportion of foreigners residing in Korea at 40.4 percent, according to the Ministry of Public Administration and Security, followed by Chinese at 15 percent and Vietnamese at 11.5 percent.

“Females [who are ethnic Korean-Chinese] in their 30s and 40s work at restaurants and females in their 50s and 60s mostly work as nannies,” Kwak Jae-suk, head of the Migration and Diaspora Research Institute, said.

“These ethnic Korean-Chinese nannies mostly live with middle-class families in the metropolitan area.”

Some gain Korean citizenship through marriage and save up and buy apartments here, or are at least permanent residents.

But some, despite being ethnically Korean and fluent in the language, are always looked upon as outsiders.

Three years ago, she caught her nanny stealing and fired her on the spot. She called the nanny’s supposed former family that employed her and was instead connected to a job recruiting firm.

“Because of these incidents, amongst workers in my office, we say finding a good ethnic Korean-Chinese nanny is ‘one of the five blessings.’ Korean nannies have resident registration numbers so their identities can be verified, but in comparison I feel nervous with Chinese-Korean nannies.”

Wages range from 1.4 million to 1.5 million won per month for these nannies, though it can vary due to size of the house, the number of additional kids and the age of the nanny.

Nannies over 60 are paid less. Bonuses are paid on red days or holidays.

Nam confesses, “When I get paid, I spend it all on the nanny.”

Every year, the nannies expect a raise.

The average wage for a Korean nanny is 2 million won, but, depending on experience and references, she can make significantly more.

Other mothers experience difficulties, with cultural differences in cooking and communication.

The nannies also have pent up grievances. Oh Jin-suk, 58, who came from China in 2002, said, “In the first house I worked at, the mother would leave her wallet lying around on purpose to see what I did with it. Thinking ‘my employer doesn’t trust me,’ I didn’t want to work there anymore.”

She added, “I would rather have the Korean government manage things more stringently. I would prefer if our experience in China is confirmed so that parents’ trust in us will increase and we will be less suspected.”

Only some 2,500 Chinese-Koreans are registered at the Ministry of Labor and Employment’s job centers as housekeepers. Most work without registering.

Professor Lee Hye-kyun said, “If you registered with the employment centers, the advantage is that employer can check the nanny’s origin and past experience.”