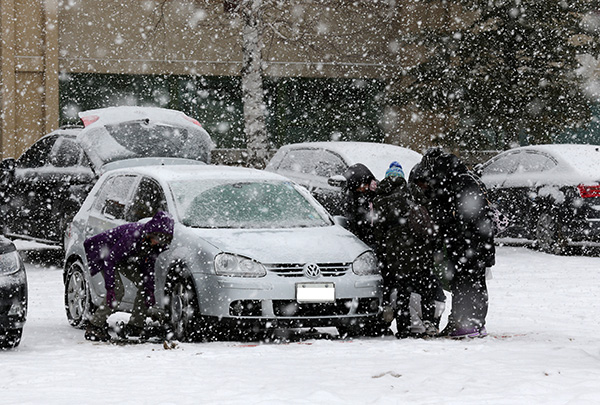 A family struggles to put chains on the tires of their car in a parking lot of the Yongpyong Dome in Pyeongchang, Gangwon, the host city of the 2013 Special Olympics World Winter Games, which was hit by two centimeters (0.8 inch) of snow as of press time yesterday. The Korea Meteorological Administration said the central region of the country, including Seoul and western areas of Gangwon, will receive about five to 15 centimeters of snow. It added that roads could be frozen as the temperature in Seoul was dropping to minus 2 degrees Celsius (28.4 Fahrenheit) over night. It reported that more snow or rain will come between tomorrow afternoon and Wednesday morning throughout the country. The temperature will sharply drop and the minimum temperature for Seoul over the weekend will be about minus 10 degrees Celsius. By Kim Seong-ryong