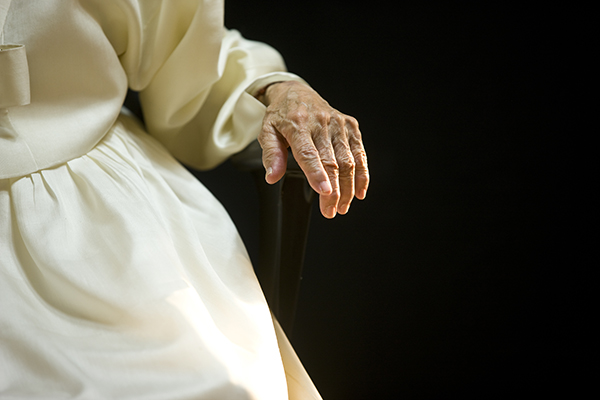 The hand of Jo Gap-nyeo


Jo Gap-nyeo tried to abandon dance and be a wife and mother. But she needed to dance, and the world needed her to do it.

At 90, Jo is the last dancer who learned her art from a master of the Joseon Dynasty (1392-1910) and 2013 marks the 80th anniversary of her dance career. Seoul Gyobang plans to put Jo on stage this autumn.

Seoul Gyobang is an association of professional dancers who seek to preserve and promote traditional dance. The association was established in 2010 by Kim Kyeong-ran, a dancer and dance theorist, and her 70 disciples. While training in the association, most dancers lead traditional organizations themselves. Members of Seoul Gyobang have performed in the National Gugak Center in southern Seoul, Seongam Art Hall in Gyeonggi and Daehangno in central Seoul, among other venues.

“Dance must come from here,” Jo said, pointing at her heart during a Jan. 24 interview with the JoongAng Ilbo at her home in Namhyeon-dong, Gwanak District in southern Seoul. Asked about her most recent performance, which took place at Seoul Namsan Traditional Center in central Seoul last year, she said these days her memory is rather faint.

She performed last at a concert by traditional singer Jang Sa-ik on Dec. 5. Some 300 figures from diplomatic circles were there. Jang introduced Jo, saying, “You’re going to see the most beautiful dance in the world, and probably for the last time.”

Jo came onstage in a wheelchair and danced a minsalpuri, a minimalist form of salpuri, for a minute. Although the old artist’s back was bowed and her legs loose, her waist swayed as gently as a willow branch. After she finished, there was a moment of silence then a standing ovation. Some wiped their eyes.

Jo is the most respected master of minsalpuri, along with Jang Geum-do. Salpuri, a kind of traditional dance, gets rid of evil spirits through dance moves using a white cloth. However, Jo’s version is performed with no cloth. While the white garment dispels ferocious spirits, the hands embrace and appease them. Therefore, the minsalpuri should be performed with “heavier” moves, experts say.

Jo’s father taught musical instruments in the local gisaeng (female courtesan) troupe in Namwon, North Jeolla. As a child, Jo learned pansori (narrative singing), dance and instrumental music. When she was 9, she met Lee Jang-seon, the last master of the court dance of Joseon, and became a pupil. Lee recognized her brilliance, saying, “She had dance in her body.”

Jo debuted at the third Chunhyang Festival in 1933. It’s a regional cultural event in Namwon to honor Chunhyang, an icon of faithfulness and a heroine of the classic Korean folktale, “Chunhyangjeon.”

At age 10, she was the youngest participant. At the festival the year after, she went onstage alone, appropriately dressed in Buddhist monk attire, to perform seungmu, a traditional dance of monks. The audience was overwhelmed. The young dancer received rave reviews and was called a master at the age of 12. 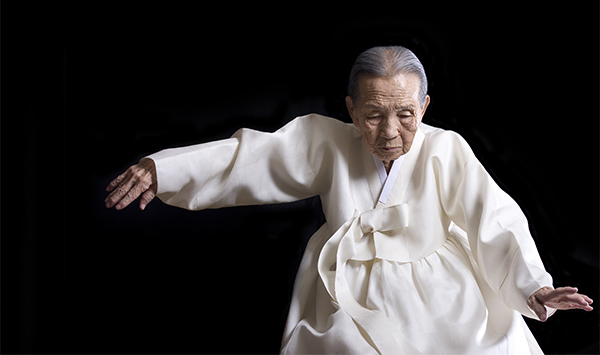 Jo Gap-nyeo took four hours putting on her hanbok and combing her hair, saying “glamour comes from inside and out.” [JoongAng Ilbo]


But her father died when she was 19 and she married Jeong Jong-sik, a wealthy business executive in the North Jeolla region who was considered one of the richest people of the time.

“I abandoned dance due to my children. Back then, all I wanted was to be a normal housewife who fixes meals and raises children,” she said. “In those days, people looked down on dancers, calling them gisaeng.”

It was like she never danced as she raised 12 children, including four children by her husband’s first wife. “The only thing I did was raise the children. I feared that if I danced again, people would judge me and my kids, too.”

However, the world needed Jo and in July 1971, she danced again. That year, the Chunhyang Festival was held on a larger scale than before to celebrate the construction of Wanwoljeong, a pavilion near the region’s famous tourist attraction, Gwanghallu.

Community leaders persuaded Jo’s husband and he persuaded Jo. She danced seungmu for 30 minutes. The last time she danced was at the Chunhyang Festival in 1976, where she danced minsalpuri.

And then she again disappeared from the dance scene for 31 years until the Seoul International Dance Festival in 2007. Officers in the Cultural Heritage Administration and newspaper reporters visited her in those years to try to persuade her to perform, although many failed. Once, a broadcaster even took her to Seoul in a van “forcibly,” to tape her minsalpuri. That “kidnapping,” in Jo’s words, took place in 1978.

“I dance only when I want. Dance can’t be forced. It comes from your heart,” she said.

Although it may seem dance was on again, off again in Jo’s life, traditional singer Jang Sa-ik says he doesn’t think so, saying, “Master Jo seems like she is always dancing.”

Her footwork is quite unique - neither splayed nor straight. “That way, you can straighten your back and maintain correct posture.”

Once dance dwells in the body, it never leaves, she said.

“After you finish studying rhythm, you can dance however you want. Just don’t forget that the moves have to be heavy and with weight. Then you don’t have to fear any melody.”