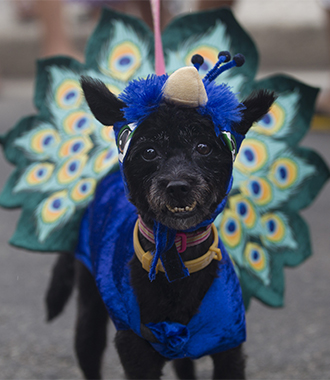 The crowd at the Blocao Carnival street party Sunday was a decidedly mixed one. Roughly half the revelers were humans, the other half dogs, though the canine contingent was unquestionably the better dressed of the two.

Several hundred revelers of both species turned out for the 11th edition of the Blocao, the most animal-friendly of the nearly 500 “blocos,’’ or raucous, heavy-drinking street parties that stop traffic during Rio de Janeiro’s Carnival festivities.

Pet owners in flip-flops and cutoff shorts and T-shirts paraded down Copacabana Beach with packs of pooches sporting smart neckties, pink tutus, jester hats, dashing tuxes fitted with satin capes and a myriad of other get-ups for four-legged partiers.

The crowd shimmied and wagged, sniffed and sambaed as dogs and owners grooved to a thumping soundtrack of traditional Carnival songs that emanated from the sound truck, itself dressed up as a dog, with a giant blowup black terrier attached to the front.

“I don’t usually like blocos for myself, but she’s loving it,’’ said Angelica Nieva, the proud owner of a year-old poodle-Yorkie mix, Belinha, dressed in a flowing white wedding gown and demure veil.

“She’s having the time of her life.’’ AP