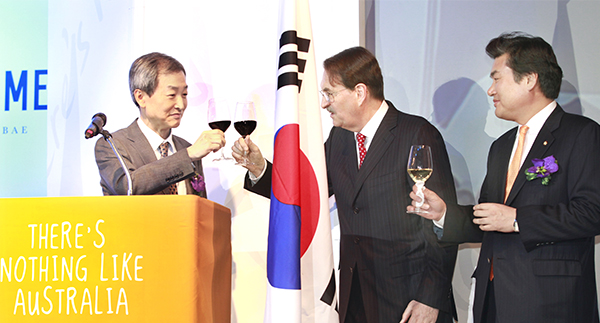 
Over 1,000 Australians and Koreans assembled on Jan. 26 to celebrate Australia’s national day and the growing friendship between the two countries through food, entertainment, fashion and beer.

Jan. 26 commemorates the arrival of the First Fleet at Sydney Cove, New South Wales in 1788 and the declaration on that day of British sovereignty over the eastern seaboard of Australia, known then as New Holland.

A public holiday Down Under, Australia Day usually warrants a barbecue and an afternoon relaxing with friends and family. Instead, guests at the Australian Embassy’s lavish event had to settle for spending time with Australian pop starlet Jessica Mauboy, model Jessica Gomes and a host of Korean and Australian dignitaries.

It was a bilateral setting at the Grand Hyatt in central Seoul, with lamingtons and lamb served alongside kimchi and gimbap (seaweed rice rolls). The night itself was a carefully curated smorgasbord of what Australia has to offer, and the enthusiasm displayed by attendees from both countries was an encouraging sign of greater cooperation and agreements to come.

Australia’s history with Korea is significant, yet rarely discussed.

The first recorded contact between Australia and Korea occurred in 1889, when Australian missionaries arrived in Busan. Australian photographer George Rose traversed the peninsula in 1904 and photographed much of the country and its people. His renowned depictions of everyday Korean life, clothing and customs form a worthy document of Korea’s history.

The relationship was bolstered through Australia’s participation in the Korean War (1950-53). More than 18,000 Australian troops served and 340 were killed.

Today, however, both states are to some degree grappling with an identity crisis abroad, and some of that came through in the proceedings.

Aspects of Korean-Australian designer Yeojin Bae’s accessory choices for the fashion show were too obviously “Australian” with a capital A, in particular the outback-inspired, wide-brimmed Akubra hats worn by some of the models. Australia still is trying to shake off its reputation for being a place merely of outback and wildlife, although this is slowly changing.

Likewise, Korea is still forging its identity. Mentioning South Korea to an Australian conjures up images of North Korea and war, although this is becoming less of an issue thanks to the likes of Psy and the significant cultural currency he now commands. His one billion hits on YouTube helped to attract a record number of tourists to this country in 2012, at a time when the Korean economy was struggling. Psy and the Korean Wave are helping forge today’s “modern” image of the Republic of Korea, a place of technology, creativity and fun.

Aside from food and fashion, there was a significant art offering as well, with an exhibition featuring photographs from former Yonhap News Agency correspondent Lee Kyung-wook, taken during his four-year stay in Sydney. Also featured was an exhibition of indigenous Australian artworks, an affirming display when much contention remains over celebrating European settlement in Australia.

Ties between the countries are only set to grow and develop, with work toward a free trade agreement between them still underway. Australian Ambassador to Korea Sam Gerovich was keen to note the opportunities that exist between the two nations in his address.

“Australia is now entering its 22nd year of continual economic growth and is now the world’s 12th-largest economy. And as a major commodity exporter, we are a vital part of Korea’s food, energy and resource security,” he said.

“I am also confident we will conclude the bilateral free trade agreement in Korea. The FTA will drive the next chapter of our relationship and tie our economies more closely together.”

The FTA was originally announced back in 2009, with discussions still ongoing.

The occasion also marked the end of Gerovich’s tenure, which will conclude later this year. There is no word on a replacement yet. Talking to the Korea JoongAng Daily, Gerovich had only complimentary things to say about the country.

“I think the most important thing to focus on with South Korea is that although it was devastated by war only 60 years ago we now see what the South Korean people have created through hard work and endurance, especially in the absence of natural resources .?.?. and it is nothing short of miraculous.

“The fact that Korea has moved from being an aid recipient to an aid donor, basically in one and a half generations, is something that has to be greatly admired.

“I think there are great things ahead for the Republic of Korea.”