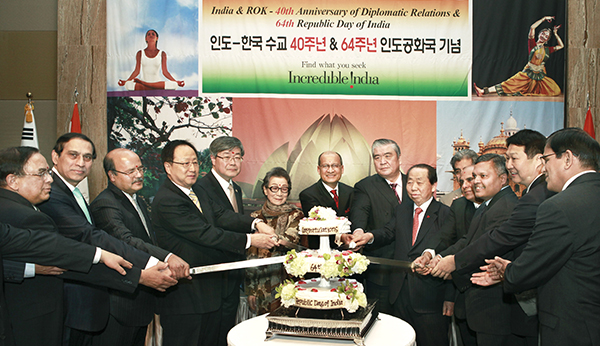 Indian Ambassador to Korea, Vishnu Prakash, center, and Lee Jae-kap, the deputy minister of employment and labor, second left from the ambassador, cut the cake at the ceremony for the 64th Republic Day of India at the Millennium Seoul Hilton, central Seoul, on Jan 23. By Park Sang-moon


The Indian Embassy in Seoul celebrated India’s 64th Republic Day on Jan. 23, at the Seoul Millennium Hilton hotel, central Seoul, where hundreds of expatriates, diplomats and government officials attended to celebrate the independence day of India and boost bilateral relations between the two countries.

“In the matter of India-Korea relations, I would like to congratulate the wonderful people of Korea,” Indian Ambassador to Korea, Vishnu Prakash, said in his congratulatory speech. “We are in one of the most vibrant countries in the world.

“The relations between the two countries have been literally prosperous in recent years,” the ambassador said. “We had a landmark visit of President Lee Myung-bak to India in 2010. Madam Park Geun-hye sees India as a national partner of Korea. Today, hundreds of Korean companies are in India, and thousands of Indian engineers and scientists are working for Korean companies in India or in Korea.”

India is one of the countries that sent medical troops to Korea during the 1950-53 Korean War. A total of 627 soldiers of all ranks served in medical support operations for Korea and treated over 2 million patients, including civilians.

Mr. Jawaharlal Nehru, then-Indian prime minister, also visited the 60 Para Field Ambulance, a medical unit of the Indian army that moved to the Korean soldiers and treated both civilians and soldiers during the three year-long war.

“India, one of the oldest civilizations in the world, is also one of the most dynamic countries full of young people,” Lee Jae-kap, the deputy minister of employment and labor, said in his speech. “India will definitely grow into one of the world’s major superpowers, along with the United States and China.”

“This year is the 40th anniversary of the diplomatic relationship between the two countries,” Lee said. “As we always did, we will maintain this good friendship from now on.”

Since India began its economic reforms to open it up to the outside world in 1991, the bilateral relations between the two countries have constantly developed, particularly in the trading sector.

In 2004, Korea and India characterized their ties as “a long-term cooperative partnership for peace and prosperity.”

The two countries are expected to set up a goal to increase bilateral trade to $30 billion by 2014, based on the implementation this year of the Cooperative Economic Partnership Agreement.