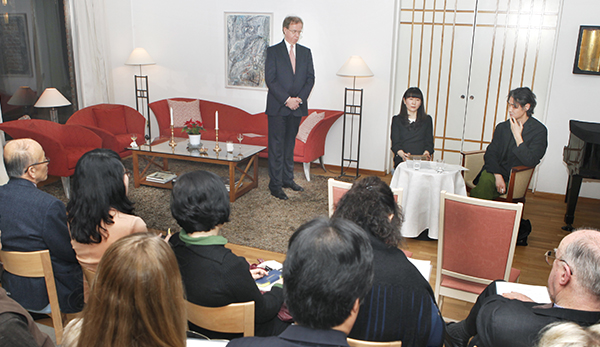 
“It was a very cold wintry night on Dec. 31, 1982. After the university entrance test, I went to the South Sea with my friend .?.?. I didn’t know why, but for some reasons, I decided to jump into the sea, into the freezing waters, totally naked.”

An audience held its collective breath as novelist Jung Young-moon started to speak at the 29th Seoul Literature Society hosted by the Swedish Embassy in Seoul on Jan. 29. About 30 people, mostly diplomats, writers, translators and students, gathered at the ambassador’s residence in central Seoul for an event that has been held since 2006 to give expatriates and Koreans opportunities to meet writers.

“And something very surprising happened,” Jung continued. “When I first jumped into the sea, I didn’t see anything in the waters. But as I moved into the water, I saw something moving.

“It was human. Three people. They were not dead. Living.

“They were female divers catching fish,” he continued. “We both were really startled. I hadn’t imagined there would be a woman in the sea, and they also didn’t anticipate a young man jumping naked into the sea.”

Jung said he narrated the same story when he attended the Dong-in Literature Award ceremony in 2012.

“At the ceremony, I had to say something for my acceptance speech,” Jung recalled. “But I couldn’t think of anything great. All I thought about were absurd things in my life.”

And that the naked jump into the sea came to mind.

“I know that was totally irrelevant for an acceptance speech,” Jung said. “What I wanted to demonstrate is that this is how the stories go in all of my novels. They don’t have specific ideas or characters.”

The 48-year-old writer debuted in 1996 with “The Person Who Barely Exists.” Since then, he has written 16 novels and published 11.

Jung said he doesn’t believe in novels being realistic. He thinks realism can’t explain all the savagery and irrationality of human beings, particularly in modern times.

At a Q&A session, Jung was asked if he was influenced by Yi Sang, a writer known for surrealism.

“I respect Lee, of course, but Franz Kafka is the one who affected me the most,” Jung said. “Most of my stories focus on why we exist in the world and whether there is any reason for the existence of the world, rather than social issues.”

Lars Danielsson, the Swedish ambassador to Korea, expressed his gratitude for the author’s participation.

“You gave us an insight in understanding the world,” he said. “It was my honor today to introduce one of the most important contemporary writers in Korea.”

“It was really great, because although my major is literature, I don’t know much about Korean literature,” said Petra Hovorkova, a Czech national studying for a master’s degree in literature at SNU. “Today was especially interesting, because this author is close to my own taste. I want to enhance my reading ability in Korean.”