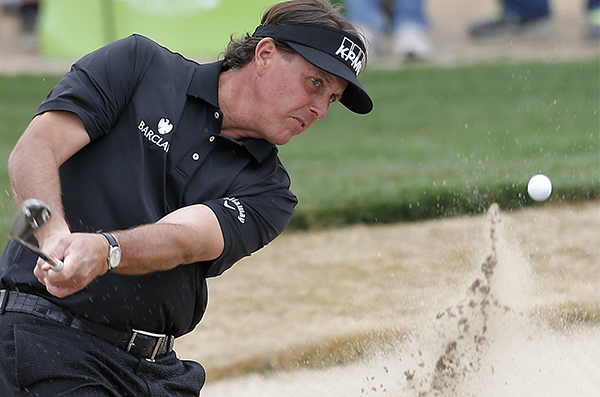 Phil Mickelson hits out of the 14th bunker during the final round of the Waste Management Phoenix Open golf tournament on Sunday in Scottsdale, Arizona. [AP/NEWSIS]


SCOTTSDALE, Arizona - Phil Mickelson completed a wire-to-wire victory in the Phoenix Open on Sunday, again flirting with history in a dominating run at TPC Scottsdale.

“It’s an important one for me, because it’s been a while since I won, been a while since I’ve been in contention,” Mickelson said. “I was certainly nervous heading into today. The thing I’m most excited about was the way I was able to regain control of my thoughts after a few shots early on that I didn’t care for.”

Mickelson missed a chance for a 59 in the first round when his 25-foot birdie putt on the final hole circled the cup and stayed out. He settled for a 60 and followed with rounds of 65 and 64 to take a six-stroke lead into the final round.

Mickelson won after struggling for the previous two weeks in his season-opening events - tying for 37th at La Quinta and 51st at Torrey Pines - and creating some headlines by complaining about tax increases. He now heads to Pebble Beach for his title defense.

Brandt Snedeker finished second, four strokes back after a 65.

“Sometimes you have to tip your hat and say, ‘Phil played unbelievable and deserved to win,’?” Snedeker said. “That’s kind of what this week was all about.”

Mickelson took a three-stroke lead to the 17th tee, and nearly drove into the left-side water on the drivable par 4, his ball stopping a yard short of the hazard. He hit his 25-yard second shot 15 feet past the hole and made the birdie putt.

Mickelson parred the par-4 18th after another drive to the left, one that easily cleared the water he hit into Friday en route to a double bogey, and Snedeker closed with a bogey.

Making his 24th appearance in the event that he also won in 1996 and 2005, Mickelson tied the tournament scoring record set by Mark Calcavecchia in 2001, and joined Calcavecchia, Arnold Palmer and Gene Littler as the only three-time winners. With six victories in Arizona, Mickelson also matched Johnny Miller’s tour record.