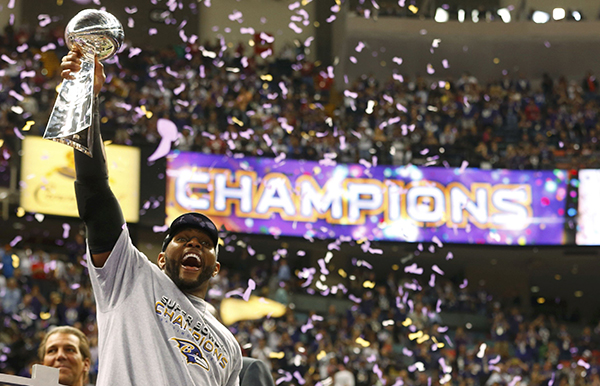 
NEW ORLEANS - In a Super Bowl that went from blowout to blackout to shootout, the Baltimore Ravens held on to edge the San Francisco 49ers 34-31 on Sunday in one of the most thrilling NFL deciders ever.

A power outage at the Superdome early in the second half stopped America’s biggest sporting event for more than half an hour and seemed to rob the Ravens of their momentum, having just established a 22-point lead.

After the interruption, the 49ers stormed back, cutting the deficit to just two points but Baltimore hung on as San Francisco came so close to the go-ahead score. The 49ers had first-and-goal in their final drive, trailing by five points, but quarterback Colin Kaepernick could not connect with a receiver.

The Ravens gave away a safety to run down the clock, making it 34-31 and while San Francisco had one last chance on the subsequent kick-off return, returner Ted Ginn Jr. was quickly swallowed up by Ravens tacklers, sparking celebrations by Baltimore players and staff.

Among those pouring onto the field in delight, and relief, was Baltimore coach John Harbaugh, who got the better of younger brother Jim in the first meeting of coaching siblings in a Super Bowl.

“How could it be any other way? It’s never pretty. It’s never perfect. But it’s us,” John Harbaugh said. “It was us today.”

Flacco’s superb first half and Jones’ return gave Baltimore a 28-6 lead, and with no team in Super Bowl history having overcome a deficit of more than 10 points, the game looked in the Ravens’ keeping.

But moments later, lights lining the indoor arena faded, making it difficult to see, and the game was stopped. For 34 minutes the showpiece event was at a halt, with some players sitting by the sideline, others on the field, while some tossed footballs and limbered up. Throughout, the cheerleaders went through their routines.

When action resumed, the momentum in the game suddenly switched. Kaepernick and the 49ers scored 17 consecutive points, getting as close as 31-29. However they could not get ahead and lost a Super Bowl for the first time, blemishing their previously perfect 5-0 record and remaining one short of Pittsburgh’s record six titles.

The AFC champion Ravens, a franchise that moved from Cleveland to Baltimore 17 years ago, improved to 2-0 in the big game. They also won the championship in 2001, when linebacker Ray Lewis was voted the game’s MVP. Lewis was not a major factor this time, but he was a center of attention, playing in the final game of his 17-year career.

Fittingly, Lewis’ final moments were in a goal-line stand, and while he didn’t have a great game, it was the veteran who was putting the pressure on Kaepernick on his last desperate pass into the end zone.

“It’s no greater way, as a champ, to go out on your last ride with the men that I went out with, with my teammates,” Lewis said. “And you looked around this stadium and Baltimore! Baltimore! We coming home, baby! We did it!”

As well as Lewis, it was a triumph for John Harbaugh, but he still felt for brother Jim.

“It’s very tough,” John Harbaugh said of their post-game conversation. “It’s a lot tougher than I thought it was going to be. It’s very painful.”

Almost as painful was the stress of the second half as his Ravens looked like they were going to blow a big lead.

About 2 minutes into the fourth quarter, rookie kicker Justin Tucker made a 19-yard field goal to stretch the Ravens’ lead to 31-23. Not long later, Kaepernick’s 15-yard run around the left side - the longest TD run by a quarterback in Super Bowl history - made it 31-29.

“Our guys battled back to get back in,” said the 49ers coach, who was still steaming after the game about the non-call for a tug on Crabtree’s jersey as he tried to take Kaepernick’s last pass.

“Had several opportunities in the game,” Jim Harbaugh said. “Didn’t play our best game. Ravens made a lot of plays,” he said.

Before the game began, with 100 million or so Americans expected to tune in on TV, a chorus of 26 children from Sandy Hook Elementary School in Newtown, Connecticut - where 20 students and six adults were killed in a shooting rampage in December - sang “America the Beautiful,” accompanied by “American Idol” alum Jennifer Hudson.

Grammy winner Alicia Keys performed the national anthem, while Beyonce was the main act in the half time entertainment.