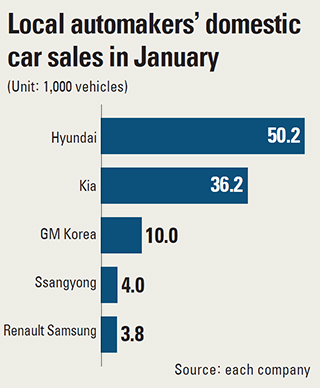 Korean automakers are rolling out aggressive promotions this month in response to less than impressive domestic sales in January.

Ssangyong Motor saw the biggest year-on-year increase (43.9 percent) after selling 4,035 units and returned to the No. 4 position for the first time in seven months, but Renault Samsung Motors suffered big, becoming the only domestic carmaker to post a sales decline from last January, plunging 38 percent to 3,850 units.


Industry insiders suggested that domestic automakers should not be satisfied with the start of the year considering there were four more business days last month than in January 2012, which included the Lunar New Year holidays.

January is usually an off-month, and automakers saw their sales dropped an average of 23.1 percent compared to December mainly due to the expiration of the government’s consumption tax cut. 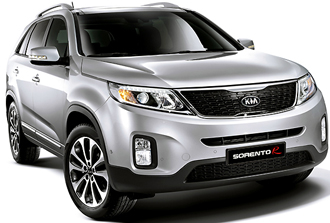 Some carmakers offered cut prices from the beginning of the year, and now they are offering more lucrative incentives related to Lunar New Year.

Hyundai and Kia said that they will retain price cuts and offer deeper discounts on selected models. The i30 and Sonata Hybrid carry discounts of 100,000 won ($92) to 1.5 million won. Also included in the February discount program are two Kia’s Sportage R and Sorento R SUVs.

GM Korea is offering discounts of up to 3.5 million won on 2012 Aveo, Cruze, Malibu, Alpheon, Orlando and Captiva models. For taxi drivers, the company will pay some taxes and fees on purchases of Orlando cabs.

Renault Samsung Motors said its customers will get a five-year or 100,000-kilometer (62,137-mile) warranty at no extra charge. In addition, the gasoline version of the QM5 carries a 1 million won discount.

Ssangyong is reducing the price of its popular SUV Korando C by 300,000 won and its flagship sedan New Chairman W sedan by 2 million won. If a buyer or family member is born in the Year of the Snake in the Chinese Zodiac or graduate in 2013, the carmaker will give additional discount of 100,000 won to 200,000 won.