Retailers try to regroup amid a holiday slump

Retailers try to regroup amid a holiday slump 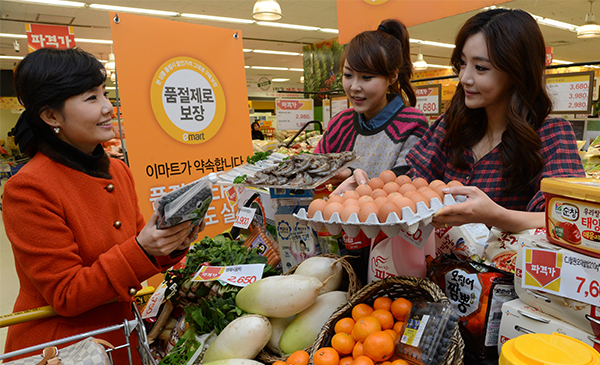 Models introduce a sale promotion at E-Mart’s Yongsan store in central Seoul yesterday aimed at combating higher prices and lower demand for the Lunar New Year holidays. E-Mart is holding the event in commemoration of its 20th anniversary, discounting 2,000 daily necessities by up to 55 percent. [NEWSIS]

E-Mart, which usually enjoys increased demand around the Lunar New Year holidays, is rolling out a sale on necessities after Korea’s largest discount chain saw its worst year-on-year sales performance since it opened 20 years ago.

Products for ancestral rites and gift sets accounted for only 20 percent of E-Mart’s sales.

As the worst sales slump continues with the demand for products for ancestral rites and gift sets vanishing, retailers are turning to sales on necessities. The 2,000 items for sale are mostly household items such as toilet paper, laundry detergent and small appliances.

“Sales for January this year declined 14 percent compared to the same month last year, posting our worst monthly sales performance ever,” said a spokesman at E-Mart. 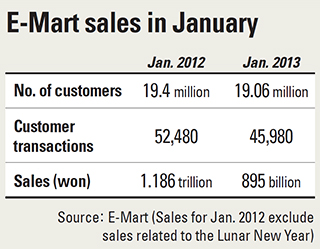 Suppliers of E-Mart and other large retailers like Homeplus and Lotte Mart are also suffering.

“We saw a 15 percent decline in sales performance for this January. The situation is almost similar to not having the national holiday,” said Yoo In-sik, deputy head of the liquor company Pernord Ricard, which prepared gifts sets for the Lunar New Year. E-Mart has high expectations for its daily necessities sale, which offers discounts of 30 percent to 55 percent and continues through Feb. 14. And at least 200 products will remain on sale after the event ends.

“The severe consumption downturn has gobbled up the special demand for the national holiday,” said Heo In-chul, a spokesman at E-Mart. “Although the Lunar New Year is just around the corner, we came up with the sales event on daily necessities as a desperate countermeasure.”

Lotte Mart has already sold 2,400 products, worth 54 billion won ($49.8 million), at half price since the end of January by holding a warehouse sale to reduce inventory. Homeplus has introduced 100 gift sets for 10,000 won. And Hyundai Department Store in Yeoksam-dong, Gangnam, southern Seoul, is kicking off a baby products sale.