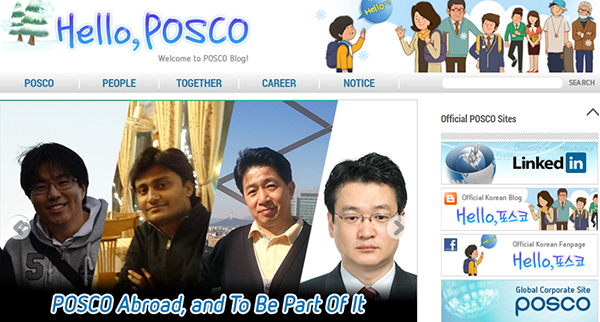 Heavy-industry companies are utilizing social network services (SNS) to extend their reach beyond the borders of Korea, an unprecedented move for business-to-business (B2B) companies with little direct contact to consumers.

However, with the spread of mobile Internet devices and SNS sites, companies have begun communicating with ordinary people to promote themselves and even search for workers. Posco, Korea’s largest steelmaker, is leading the trend by joining Facebook, Twitter and LinkedIn.

Last week, the steelmaker also started an English-language blog dubbed “Hello Posco.” On it, a New Caledonia-born French girl named Vivier introduces herself and shares her experiences during a three-month internship in a Posco unit. The 25-year-old said she heard about the collaborative nickel project between Posco and SMSP, New Caledonia’s largest nickel exporter in 2007. Hearing the news, the first to come to her mind was: “That’s where I belong.”

In her own words, she blogs about interesting and embarrassing personal experiences at the Korean company, not about the steel or nickel industry.

Posco lately has been using LinkedIn to identify and recruit bright foreigners.

LinkedIn is the world’s largest SNS site for businesses, with more than 200 million users.

The steelmaker even set up a task force last year to operate its SNS initiatives and forge closer ties with consumers.

“According to a survey by our team, about 40 percent of recruitments at North American companies were made on LinkedIn,“ said a member of the SNS team.

A report by the Korea Trade-Investment Promotion Agency (Kotra) found that SNS is an efficient tool for B2B companies not accustomed to communicating with consumers.

According to the report, there are an increasing number of cases of local B2B companies finding appropriate partners via LinkedIn and other SNS sites. Kotra provided support for more than 120 B2B companies, including auto parts and materials exporters, to market their products and brands using SNS.

Those companies now have about 9,000 new sales channels found on the Internet.

“Since SNS sites require detailed profiles of users, it is easier for businesses to find the right partners or buyers without paying any costs, especially for small businesses,” said an official at the agency.

GS Caltex is a popular B2B company online, with more than 40,000 fans on Facebook. “The reason why we run the page is to talk with people, not to just speak to them,” said a PR employee of the company. The company posts a message a day about the impact of the refinery industry on the daily lives of ordinary people to increase public awareness.

Samsung Engineering has sent more than half its employees to overseas construction sites and is also utilizing Facebook.

However, some experts are skeptical about the value of SNS for industries that are not consumer oriented.

“Definitely, there are limits for such companies,” said Park Seong-min of Samsung Economic Research Institute. “Most companies first try communicating with consumers, but that doesn’t last long.”

Park suspects the current SNS fever could just be an attempt by companies to appear “trendy” and many might mistake posts on the Internet for two-way communication.

“Many businesses that do SNS marketing or public relations think they are talking with consumers, but in most cases they just speak to them,” he said.

Among SNS users, business pages are generally considered boring because they often focus on blatantly publicizing their products or staff, he said.