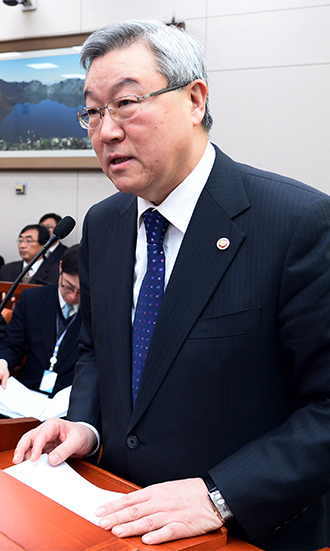 Foreign Minister Kim Sung-hwan yesterday opposed the incoming administration’s proposal to hive off the trade division from his ministry and give it to the commerce ministry, saying it could “shake the framework of the Constitution.”

Kim was also backed by lawmakers from both the ruling and opposition parties who oppose the plan announced by President-elect Park Geun-hye’s transition team last month as part of a government reorganization.

The transition team refuted Kim’s remarks and described them as “chop logic.”

The reoganization, Kim told lawmakers yesterday in a meeting convened by the National Assembly’s Unification, Foreign Affairs and Trade Committee, “could lead to results that shake the framework of the Constitution and also the National Government Organization Act.”

Under the Constitution, a president has the power to sign and ratify trade deals with other countries. The foreign affairs minister has the power to move forward such deals on behalf of the president. According to Kim, if the National Assembly passes the bill giving the Foreign Affairs Ministry’s authority to sign trade deals to a newly named Ministry of Industry, Trade and Resources, it will be going against the Constitution.

The bill was introduced by Representative Lee Hahn-koo, floor leader of the ruling Saenuri Party, after the presidential transition team confirmed its government restructuring plan last month. Members of the National Assembly’s foreign affairs committee must review the bill and submit their views. There are currently 37 bills related to the government restructuring that must be reviewed by eight parliamentary committees.

The ruling Saenuri Party and the opposition Democratic United Party agreed to approve bills for the government’s restructuring by Feb. 14.

“I am aware that there are criticisms that what I’m saying right now can be seen as an act of ministry selfishness, to protect the Foreign Affairs Ministry,” Kim said. “But I’m voicing my opinion out of national interest.”

“The president can entrust the rights to the industry and trade minister if needed,” he said. “Minister Kim made the remarks as if the foreign affairs minister is given a constitutional right.”

President-elect Park’s transition team wants to fold the trade division of the Ministry of Foreign Affairs and Trade into a proposed Ministry of Industry, Trade and Resources, which will replace the current Ministry of Knowledge Economy. Two new ministries were also created along with a deputy prime minister to look after the country’s economic affairs.

Lawmakers from both the ruling and opposition parties joined Kim in opposing the administration’s plan.

“It is only right to keep the Foreign Affairs and Trade Ministry and come up with complementary measures if needed,” said Chung Eui-hwa from the ruling Saenuri Party.

Choung Byoung-guk of the ruling party also proposed the idea of setting up an independent body dealing with trade like the United States Trade Representative.