North could use uranium for test; tunnel site located

North could use uranium for test; tunnel site located 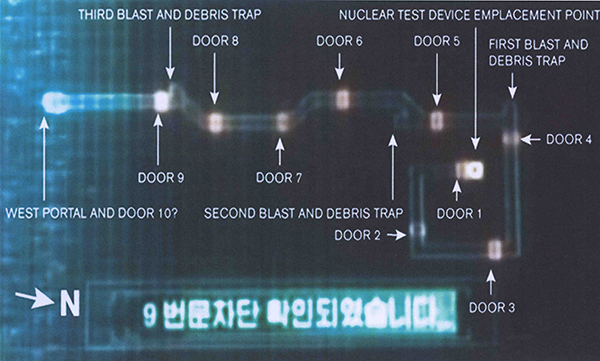 South Korea’s Defense Ministry released a tunnel map from captured footage by the North’s official Korean Central Television. The Defense Ministry analyzed the map, which shows the tunnel on the western side of the nuclear test site, where they think the second test was carried out. Provided by the Defense Ministry

While the international community waits for Pyongyang to press the button for its third nuclear test, South Korean Foreign Minister Kim Sung-hwan said the regime could use uranium fuel this time.

Kim attended a meeting of the National Assembly’s Foreign Affairs, Trade and Unification Committee yesterday and answered questions from lawmakers on the current situation in North Korea. When Won Yoo-chul, a ruling Saenuri Party lawmaker, asked Kim if the North could have already manufactured a powerful hydrogen bomb, Kim responded, “There is a possibility that they could use enriched uranium fuel.”

“They already opened the facilities to enrich uranium in 2010,” Kim said. “Given the fact, we predict they could have already produced some fuel.”

He also added that it’s because North Korea has spent most of its plutonium fuel for its previous two tests in 2006 and 2009. Pyongyang has recently threatened Seoul with a warning of a “higher-level nuclear test” in defiance of the new UN resolution that expanded sanctions against its entities and individuals.

When independent lawmaker Park Joo-sun asked if he judges that North Korea already has an atomic weapon, he said, “I think they are steadily moving toward it.” About when he anticipates Pyongyang will detonate the test, Kim said it would probably happen during an important national holiday in the United States.

“We can assume some dates, such as Feb. 12, when the U.S. president delivers his State of the Union address, or Feb. 18, President’s Day,” Kim said. They believe it will correspond with a U.S. holiday because the first nuclear test was conducted on Columbus Day, Oct. 5, 2006, and the second on Memorial Day, May 25, 2009, Kim explained. “Otherwise, they could do it on Feb. 16, the birthday of Kim Jong-un,” he added.

Yu Woo-ik, minister of Unification, said at the meeting that although he is assuming several dates, “it’s not appropriate to pinpoint a certain date.”

“They will possibly carry it out at a time when they judge they can highlight the political and military impact of the test domestically and internationally,” Yu said.

When Yoon Sang-hyun, a Saenuri lawmaker asked “how many atomic weapons can North Korea produce with their highly enriched uranium fuels?” Yu said, “I see the regime having the capability to produce several nuclear weapons.”

Amid the escalating tensions, Ministry of National Defense released a tunnel map of captured footage from the North’s official Korean Central Television. In September 2010, the state-owned television company showed footage of a control room for the second nuclear test in a documentary dubbed “The Country That I Saw.”

The media said the room was used to control the second nuclear test, conducted on May 25, 2009. The South Korean officials analyzed the video and discovered a monitor in the assumed control room displaying a tunnel map.

Officials from the South think that the tunnel on the western side of the nuclear test site in Punggye-ri, in the northeastern part of the country, was where the second test was carried out.

The tunnel is a one-kilometer (0.6-mile), one-way path, winding inwards and leading to the test pit.

There are 10 gates in the path that are supposed to close, including the entrance, in order to block the hazardous radioactivity from the atomic test and absorb impact from the explosion. There are also three traps to collect debris.

The pit at the end of the path is ground zero for the test. The 10 gates could possibly be made of strong steel or concrete to prevent radioactive emissions.