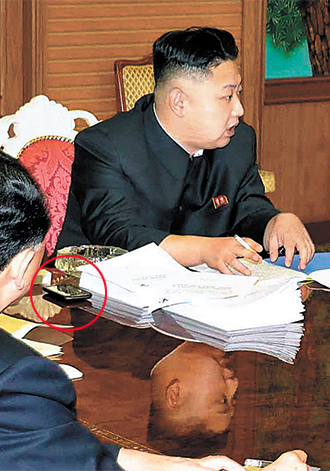 A smartphone (in red circle) is spotted next to North Korean leader Kim Jong-un in a photo released by North Korea’s official Korean Centeral News Agency on Jan. 27. Kim was presiding over a meeting of security and foreign affairs officials in the undated picture, KCNA reported. [REUTERS/NEWSIS]

But he’s not a fan of either Samsung or Apple devices.

“After a close analysis of photos and footage from the North’s state media, we found some clues that Kim is using a smartphone,” an official at the South’s Ministry of Unification told the JoongAng Ilbo on Sunday.

On Jan. 26, Kim convened a top security meeting and ordered some “high-profile measures” as Pyongyang appears to be preparing a third nuclear weapons test.

At the time, a photo released by the Korean Central News Agency showed Kim and security officials meeting around a table. A black mobile phone could be seen next to Kim.

“Given that Kim has put the phone right next to a document in front of him, we assume that he carries it himself,” the official said. Possibly Kim uses it to communicate directly with party officials or his family.

The official said that intelligence authorities concluded the phone is a recent model by Taiwanese manufacturer HTC.

North Korea doesn’t allow people to access to the Internet through a smartphone, the official said. People can only make calls or send texts.

“It appears that Kim, his family, and some inner-circle officials are using mobile phones or smartphones that can access the Internet and send some digital data,” the official continued. “Or maybe Kim was given a special mobile phone that is capable of Internet services.”

The official added that using a Taiwanese phone might be more politically correct than using one from South Korea or the U.S., declared enemies of the communist state.

In 2008, the regime’s Ministry of Posts and Telecommunications and Orascom, an Egyptian telecommunication company, founded a joint venture called Koryolink, which is the North’s only 3G mobile operator.

Orascom Chairman Naguib Sawiris said in an interview with media last November that there were roughly 1.5 million people in North Korea who use mobile phones and predicted the number of users would surpass 1.7 million by December 2012.

Yazhou Zhoukan, a weekly magazine in Hong Kong, said in its latest edition that “roughly 60 percent of residents in Pyongyang aged between 20s and 50s are using mobile phones. Some even started to use smartphones, such as iPhones or Nokias.”