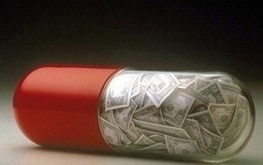 Korea’s two major umbrella organizations for medical doctors vowed efforts yesterday to eradicate drug company rebates but still blamed the government’s low-cost policy as a root cause of the problem.

In a joint press conference, the Korean Medical Association and Korean Academy of Medical Sciences said they will come up with their own disciplinary measures to discourage their members from taking rebates from pharmaceutical companies. The move comes as hundreds of doctors have been or are expected to be summoned in one of the largest drug company rebate scandals.

One of the worst medicine scandals in the country’s history came to light late last month when the police charged 18 officials from three major pharmaceutical companies here on suspicions of offering at least 4.5 billion won ($4.14 million) in kickbacks to doctors for prescribing their products between May and November of 2011. The police have also said they will formally charge at least 74 doctors on charges of receiving medicine rebates and refer dozens more to related offices for administrative disposition on similar suspicions.

Monday’s declaration by the two organizations, however, largely remains symbolic in that most drug company rebates take place on a personal level between drug companies and individual doctors.

The organizations, too, claimed doctors have been somewhat forced to seek additional income from drug companies due to what it called erroneous government policies that led to distorted drug prices and low medical fees.

“To eradicate medicine rebates, all these structural causes must be removed, but this (declaration) means the medical circle will first work to eradicate them,” they said.

They also proposed establishing a trilateral group, consisting of government, medical and drug company representatives, which will work to come up with ways to root out medicine rebates.

“Now, getting rid of rebates depends on the government and pharmaceutical companies,” they said.