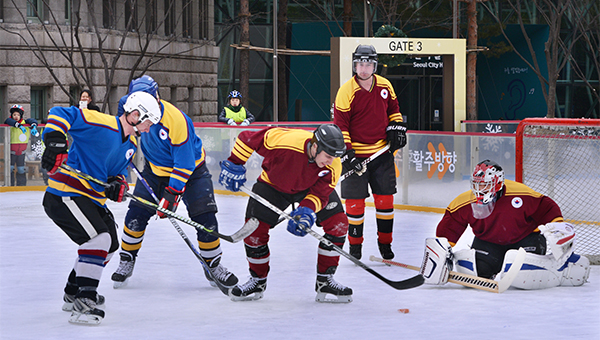 Seoulites and their Canadian friends, top, re-enact a friendly ice hockey game, which was held near the front lines on the frozen Imjin River in 1952 by Canadian soldiers. By Park Sang-moon

Despite the frigid winter weather, dozens of Seoulites and their Canadian friends gathered around the open-air ice-skating rink in front of City Hall in central Seoul on Sunday.

Celebrating the 50th anniversary of diplomatic relations between Korea and Canada this year and also commemorating the 60th anniversary of the armistice of the Korean War, the Canadian Embassy, together with the Seoul city government, the Korea Ice Hockey Association and the Ministry of Patriots and Veterans Affairs, organized a friendly hockey game in the spirit of those held near the front lines on the frozen Imjin River in 1952 by Canadian soldiers during the Korean War.

The hockey players were part of a local group founded more than a decade ago by Canadians in Seoul.

Every year, the team hosts the so-called Imjin Cup to commemorate the experience of the Canadian troops in Korea. 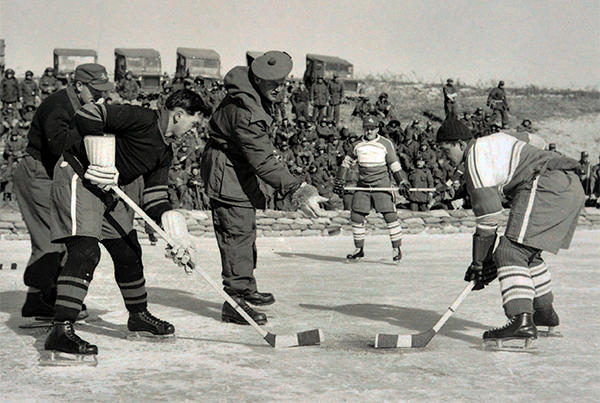 During the Korean War, on the open-air ice-skating rink in front of City Hall in central Seoul on Sunday. The event was organized to celebrate the 50th anniversary of diplomatic relations between Korea and Canada this year.[NEWSIS]

“This is an opportunity to celebrate joint history between Canada and Korea,” said David Chatterson, Canadian ambassador to Korea. “Hockey is part of what Canada is, and 61 years ago when our troops were here in Korea, they played several hockey games on the Imjin River. This was an opportunity for us to recreate that game, a shared history from 61 years ago.”

Around 27,000 Canadian troops participated in the Korean War, and one of their forms of relief was hockey.

“Over the years, I’ve had a number of chances to be involved with visits from our veterans in Canada and the one thing they remember, the one thing they talk about besides the fighting was the opportunity to play ice hockey,” said Michael Danagher, minister counselor and senior trade commissioner at the Canadian Embassy.

On one side of the Seoul Plaza, there was a display of black-and-white photographs depicting Canadian troops playing hockey.

“It’s a small selection but when I look at it, you see the emotions in the faces of the players in that day,” Danagher said. “It brings back some of the timelessness and the love of the sport even in difficult circumstances.”

Danagher added that “the intention of this [event] was to commemorate what was a bittersweet event in the experience of the Canadian troops in Korea and also to try to help popularize hockey in Korea.”

According to the minister counselor, hockey rules were first devised at McGill University in Montreal in 1879. He said the popularity of ice hockey spread throughout North America and Europe to Asia, which was “primarily due to Canadians.”

“The Imjin River Cup started in 2000,” said Charles Fullerton, an English teacher at Hongik University and a Geckos member who was on the ice on Sunday.

“Some of the original members of the team found one of the displayed pictures from here at the United Nations Compound in Itaewon, and they got interested in making a tournament to honor the soldiers who fought in the war.”

There are around 60 members of the Geckos hockey team, which also includes Koreans, Americans and Swedes along with Canadians.

They play every weekend in Anyang, Gyeonggi, and in April, hold the annual Imjin Memorial Cup tournament.

Marc Bellemare, an assistant Canadian defense attache at the embassy, also a Geckos member, added that the jerseys the players wore on Sunday were designed according to some of the pictures they had of Canadian soldiers in the Korean War.

“The pictures were black and white so we went to Canada and asked what the colors of the unit at the time were,” he said. “It feels great, like myself, I’m in the military, so it’s an honor to play in the memory of the men and women that served during the Korean War and to represent the Canadian forces.”

“It’s wonderful that in downtown Seoul we can celebrate, not just as Canadians, but with the people of this country, the history that Canada has had with Korea,” she said.

“Not just today but for many years, sports have brought people together and for the people of Korea, the fact that in five years, you will be celebrating sports with the rest of the world with the Olympics and the Paralympics.”

Pamela Mcintyre, a Canadian resident in Seoul who was at the game, also said, “It’s good to be able to come out and show your Canadian colors and support our Canadian friends and show Korea a little bit of Canadian kindness and friendship.”