Seoul gets lots of snow and more expected today

Seoul gets lots of snow and more expected today 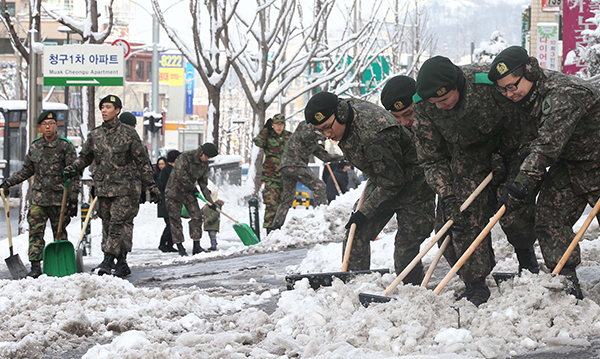 Soldiers from the Capital Defense Command shovel snow off a road yesterday morning in Seodaemun District, central Seoul. The capital was covered with 16.5 centimeters (6.49 inches) of snow yesterday, the most it has seen in February since 2001, forcing many commuters to leave their cars at home and use public transit instead. By Oh Jong-taek

Seoul got hit with its biggest February snowfall in 12 years yesterday, which according to the traditional Korean calendar was supposed to be the first day of spring. 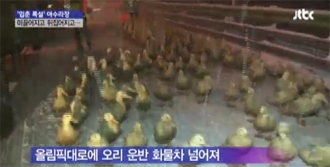 The snow, which began Sunday evening, eventually measured 16.5 centimeters, or 6.49 inches, and it disrupted air and ground traffic, forcing many commuters to leave their cars at home and opt for public transport.


The capital saw the most snow in February since 2001, when it received 23.4 centimeters. The 16.5 centimeters was also the most snow the city has seen this winter, according to the Korea Meteorological Administration.

“Low atmospheric pressure coming from the West Sea developed a snow cloud as it absorbed water vapor on its way to the country, bringing with it snowfall,” the weather agency said.

Schools in Seoul, Incheon and cities in Gyeonggi delayed the start of classes by one hour. The Seoul Metropolitan Police Agency dispatched 2,300 officers yesterday morning to control traffic on icy roads in the city. The Seoul city government added 32 additional subway trains during the morning rush hour yesterday to accommodate an increased number of commuters.

The Seoul Metropolitan Government also dispatched 12,000 civil servants to clear roads with shovels and by spraying snow-melting calcium chloride, which led to the only casualty from the snowfall. A 47-year-old female employee from the Bucheon District Office in Gyeonggi was buried under nearly a ton of sacks of calcium chloride, fracturing bones and crushing her internal organs. She is in the intensive care unit at a Bucheon hospital. 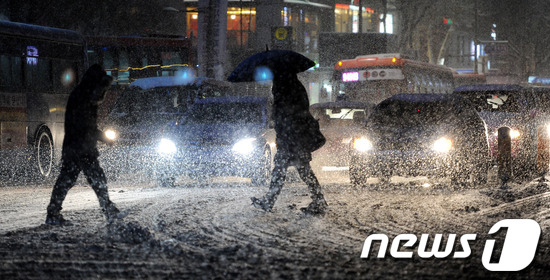 An airplane landing at Gimpo International Airport slid off an icy runway and onto the grass at around 10:20 a.m. The plane was towed to a gate, and no casualties were reported, according to authorities.

Icy runways caused delays of 232 flights departing from and arriving at Incheon International Airport, while 19 domestic flights to and from Gimpo were canceled as of 2:30 p.m. yesterday.

The Korea Meteorological Administration expected the snow to continue today and tomorrow nationwide, including Seoul, with up to 4 centimeters of snow. The weather forecaster predicted the snow will stop from Thursday.

After the snow, however, a cold spell is on its way. Seoul will see its mercury drop to minus 10 degrees Celsius (14 Fahrenheit) Thursday. Seoul’s temperature will fall further Friday to reach minus 13 degrees Celsius.

The cold spell will continue through Sunday, the Lunar New Year’s Day, with temperatures in many parts of the country including Seoul, Gyeonggi and Chungcheong regions below zero degrees Celsius.

The weather agency forecast temperatures will climb up to zero degrees Celsius Monday and continue above the zero mark during the next week.

The state-run weather agency also predicted the latter part of February will be warmer than the usual minus 1 degree to 6 degrees Celsius in February.