Duo has lots to prove against Croatia

Duo has lots to prove against Croatia 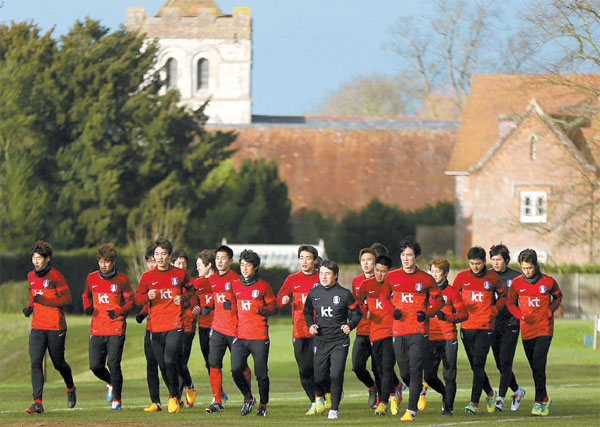 
When Lee Dong-gook and Park Chu-young enter a tune-up match against Croatia tonight, they will have to sweat it out more than usual to prove their mutual compatibility.

Korean national football team coach Choi Kang-hee’s experiment with the striker duo has been a failure so far. Speculation is growing that one of them will be given a starting position at the expense of the other if Korea advances to the Rio de Janeiro World Cup next year.

Lee, for one, is well aware that time is running out for them to reverse their fate.

“It seems like people out there are misunderstanding the relationship between me and Chu-young,” Lee told reporters while training in Berkshire for the Croatia match, to be held at Craven Cottage, London at 11:05 p.m. today, Korean time.

“There are no problems between the two of us, but people keep talking as if there are,” Lee said. “So I want to create the kind of scene that fans want to see.”

Lee, a veteran striker for the Jeonbuk Motors, played in eight of the nine games since Choi, his former coach at the Motors, took the helm of the national team in December 2011. He scored five goals, helping Korea maintain a leading position in Asian qualifying group A for the 2014 World Cup.

None of the goals, however, were scored along with Park, a forward with Spanish club Celta Vigo. As yet, Park has failed to score for Choi.

The two have only collaborated on one goal since they began playing together for the Taegeuk Warriors as far back as 2005. Park scored the winner in Korea’s 1-0 victory over Angola on March 1, 2006 on a pass from Lee.

Lee, 33, had fanned rumors of discord with Park by keeping mum on the issue, but this time he said he wanted to clarify the situation. He said he would be pleased if he could help Park score. “I don’t want to hear any more talk that we’re out of sync,” Lee said.

His sense of urgency may be rooted in the fact that next year will be the last for Lee, the most prolific goal-scorer in the K-League, to show that his skills are still useful on the World Cup stage. Lee missed out the 2002 World Cup, when Korea advanced to the semifinals. He played briefly in the 1998 and 2010 World Cups.

It’s likely that Park, 27, will bring more sharpness on offense than Lee. Lee has not played since the K-League wrapped up its season on Dec. 2, while Park has scored three in the ongoing season in Spain. Choi said Park was improving in training.

Son Heung-min. dubbed “a sensation” in Bundesliga for his searing scoring ability, will add another layer of offense against Croatia.

It is the first time Son, 20, will play with Park and Lee and the Hamburg forward has a strong motive to outperform them. Scouters from big European leagues will come to see the Croatia match, helping to decide his fate after the season. Son has scored seven goals for Hamburg this season and rumors are tying him to such Premier League clubs as Chelsea, Tottenham and Liverpool.

Son has only managed to score once in 11 games for Korea so far.

“He’s a highly usable player,” Choi said. “He’s been playing well recently. He can play both the side and the center, and I have high expectations for him.”