Old Masters and Renaissance art rake in $170 million at auction

Old Masters and Renaissance art rake in $170 million at auction 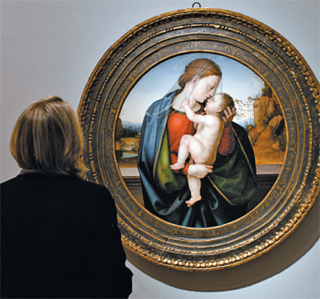 “The Madonna and Child” by Fra Bartolommeo hangs in Christie’s gallery in New York on Jan. 29. [REUTERS/NEWSIS]

NEW YORK - Three paintings each sold for more than $10 million and artists’ records fell as auction houses Christie’s and Sotheby’s collectively moved some $170 million in Old Master and Renaissance art this week.

The auctions, including a big-ticket sale at Christie’s dedicated to Renaissance art, featured works by Batoni, Rubens, Gainsborough and Botticelli.

A rare, circular-format oil portrait by Fra Bartolommeo, “The Madonna and Child,” which dates to the mid-1490s, achieved the week’s highest price. Still set in its original frame, the painting from a private collection fetched $12,962,500 including commission - in the middle of Christie’s pre-sale estimate range of $10 million to $15 million.

The top painting in Sotheby’s’ week of sales, which will wrap up with a small Saturday session, was Pompeo Girolamo Batoni’s “Susanna and the Elders.” The 1751 work had been estimated to sell for $6 million to $9 million but soared to $11,394,500.

“There was tremendous international bidding throughout the week, particularly from Russian collectors,” they added.

Sotheby’s took in more than $80 million, shy of the low $89 million pre-sale estimate.

Nicholas Hall, Christie’s co-chairman of Old Masters and 19th-century art, said its $88.4 million total - in the middle of the $75 million to $115 million estimate - was the best result for its series of sales in New York since 2006.

A year ago the sales at Christie’s and Sotheby’s combined took in about $120 million.

Other highlights included another Madonna work, Botticelli’s “Madonna and Child with the Young Saint John the Baptist,” which sold for $10,442,500, well over Christie’s’ $6 million estimate.

Known as “the Rockefeller Madonna” owing to its five decades in the collection of John D. Rockefeller, the work, along with the Fra Bartolommeo Madonna, was sold at Christie’s Renaissance sale, devoted to European works from 1300 to 1600. Both works set auction records for the artists, and Hall said that Christie’s was so pleased with the $42.6 million total that it would repeat the special sale again in 2014.

One casualty was “Portrait of a Young Man with a Book,” an early 16th-century painting by Italian artist Agnolo Bronzino, which carried an estimate of as much as $18 million but went unsold. Reuters