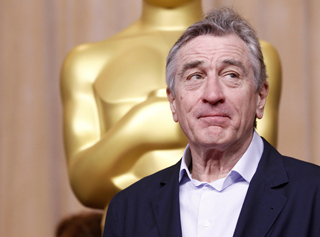 De Niro, 69, gave a short thank you speech with a few punch lines of his own.

“[Actor] Joe Pesci always said I’d end up with my feet in cement. I don’t think this is what he had in mind,” said De Niro, referring to the many gangster movies he has filmed over his 40-year career.

De Niro, who founded the Tribeca Film Festival in 2002 in a bid to revive lower Manhattan after the Sept. 11, 2001, attacks, is in the running for a third Oscar this month for his supporting role in comedy “Silver Linings Playbook.”

Billy Crystal, who played therapist to De Niro’s insecure mob boss in the 1999 film “Analyze This,” praised the New York actor for his ability to bridge comedies like “Meet the Parents” and dramas such as “GoodFellas” and “Taxi Driver.”

“Even in his darkest performances, even in ‘Raging Bull’ .?.?. he could make you laugh, and that he did in spades in ‘Analyze This.’ .?.?. I’m not used to playing straight for anybody, but it was a thrill of a lifetime to be on the opposite side of that genius,” Crystal said.

“Silver Linings Playbook” director David O. Russell praised De Niro’s sensitivity in taking on the role of the father of a bipolar son in the movie.

“When we first read the script together he cried because he has known people who struggled with PTSD or bipolar disorder. .?.?. Many families are no stranger to these challenges, and they have to find the magic and the love that Bob brought in his soul, and he did bring his soul to this movie,” Russell said.