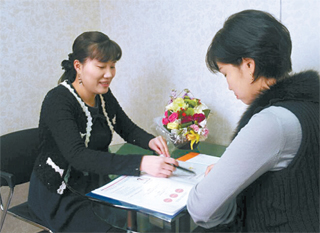 A divorced woman in her 40s, right, receives advice prior to registration at a matchmaking business. Provided by Only You

For many divorcees, dating again seems like the logical way to get over a break-up. As the number of divorces rises, it has become increasingly common for the previously married to seek that second special someone.

But matchmaking experts warn that starting a new relationship isn’t as simple as it might seem. Divorcees, they say, often feel as if their entire lives have been altered and thus take a different approach to romance than those who have never been married.

“When someone considers remarriage, there are extra points that need consideration and are not relevant for those who were never married,” said a divorce consultant who wished to remain anonymous.

“Some divorced people get hurt easily. That’s why one should speak more carefully when talking with them.”

A 45-year-old man surnamed Jang said he must walk a fine line when meeting a divorced woman for a date.

“Once, to break the ice, I just casually asked why she divorced her husband. As soon as I mentioned the word divorce, she started crying and asking why I brought up the issue. I didn’t intend to hurt or attack her. I was so confused,” Jang said.

Lee Kyung, director at matchmaking company Bien, said that Jang’s situation was not uncommon and had some specific advice for men re-entering the dating scene.

“Men tend to ask about the former marriage without thinking too much,” Lee said. “So we ask men not to bring up the divorce issue until they become really close to a woman.”

“Many men assume that female divorcees are more sexually generous. But the key to a life-long relationship is to become considerate of the partner’s feelings,” said Jung Su-jin, another consultant at Bien.

There is special advice for women as well.

“Women are more likely to compare potential partners with the former husband,” Lee said. “The comparison is unintentional, but they should try to avoid it if possible.”

Experts also emphasize that women should be more considerate about dating expenses.

“Women should not demand that men pay for all the dating expenses and should not ask for luxurious bags or other items,” said another matchmaker. “One man complained that a woman even asked him to buy her baby’s clothes.”

It’s also important for both genders not to dwell on the past.

“If one frequently talks about a former relationship, it’s possible to come across as immature,” the matchmaker said.