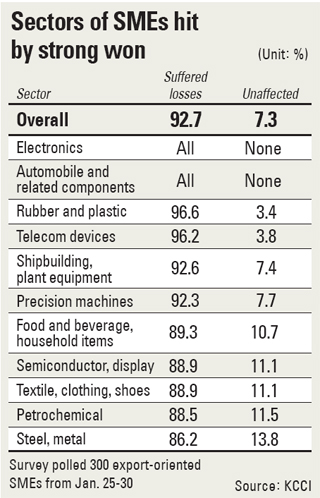 Nine out of 10 export-oriented small- and medium-sized enterprises in Korea have seen snowballing losses due to the strengthening of the won against the American dollar, the Korea Chamber of Commerce and Industry (KCCI) said yesterday.

Of 300 SMEs that participated in a KCCI survey on business conditions between Jan. 25 and Jan. 30, 92.7 percent said they have been hit hard by the strong won, a huge jump from November’s 53.1 percent.

According to foreign exchange dealers, the won strengthened to an average 1,066 won against the U.S. dollar in January alone. The exchange rate crossed the 1,100 won per dollar mark in November.

The survey showed SMEs in the electronics and automobile sectors have been the hardest hit as the fast appreciation of the local currency weakens the price competitiveness of Korean exports over Japanese rivals. The rubber and plastic sectors followed, then telecom devices, shipbuilding and plant equipment.

SMEs said the three main culprits hurting their businesses are: foreign exchange losses that occur in export contracts signed before the value of the local currency began to appreciate, diminished exports and weakened price competitiveness. Others said the strong won has forced them to revise their business plans for this year and let some workers go.

“The strong won has cut exports by 15 percent compared to usual, and to make matters worse, raw material prices are rising,” said an owner at a mid-sized pharmaceutical company based in Anyang, Gyeonggi. “To tackle this situation, we urgently need to increase the export unit value. But we can’t raise it hastily because we fear we’ll earn less revenue as foreign customers will choose cheaper products over ours, which are sold at higher prices.”

A textile company based in Gumi, North Gyeongsang said the weakening yen is also a major headache.

“Thirty percent of our entire revenue is generated from the Japanese market,” said one company owner. “As the weakened Japanese currency has raised the prices of our products sold in Japan, we can’t compete with Japanese rivals who sell the same products at lower prices.”

Thirty percent of SMEs said that they don’t have countermeasures to cope with the won’s appreciation.

“The won will continue to gain against the dollar for a while and it will likely fluctuate more compared to last year,” said KCCI official Sohn Young-gi. “SMEs should actively engage in measures to stem the foreign exchange risk. They also need to fully utilize government-supported financial aid programs for SMEs in addition to developing products that differentiate them from their competitors to raise the non-price competitiveness of Korean exporters.”

Meanwhile, Financial Supervisory Service Governor Kwon Hyouk-se has ordered the financial watchdog to closely monitor whether conglomerates are passing the burden of the unfavorable market to powerless suppliers.

Big companies typically pressure suppliers to cut component prices or pay for SME products with dollars instead of won to make up for losses.