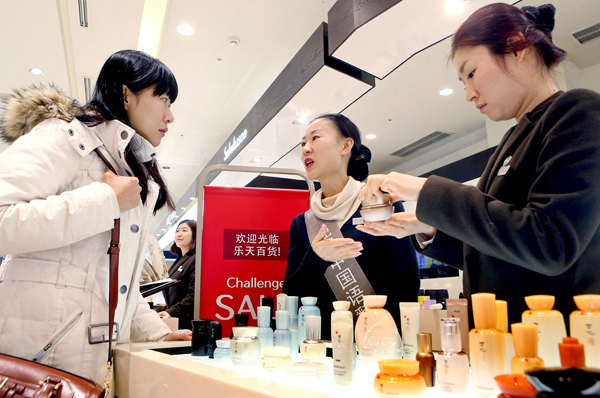 A Chinese customer hears information about a cosmetic product through a translator at Lotte Department Store in central Seoul. There are about 20 Chinese and Japanese interpreters at the store. By Kim Do-hoon

Park Seong-won, manager of casual clothing brand VOV at the Lotte Department Store in Sogong-dong, central Seoul, recently applied for a badge handed out to those who can speak foreign languages.

She was a bit hesitant, but decided she could now communicate in simple Chinese with customers without the help of part-time interpreters.

The customer service team at the store recently received applications from employees for the badge that says, “Interpretation service available” and identifies the languages.

Among the 300 badges distributed, 70 percent were for Chinese.

At the 1,000 stores in the Lotte chain, more than 20 percent of shop managers can communicate in Chinese.

That is indicative of the efforts being made by Korean department stores to attract Chinese customers over the Lunar New Year holidays at a time of declining numbers of Japanese tourists and slumping domestic demand.

During the Chinese New Year holidays from Saturday through Feb. 15, the number of Chinese tourists visiting Korea is expected to reach 63,000, up 25 percent from last year, according to the Korea Tourism Organization.

Sales of UnionPay Card, a popular credit card among Chinese tourists in Korea, surged 160 percent last year compared to 2011, and the card ranked fifth among 12 companies in the amount of purchases, ahead the Samsung, Korea Exchange Bank and Hyundai credit cards.

Also, Lotte handed out tablet PCs to personnel at information desks to introduce guide services to Chinese customers, who often ask about tourist attractions around Myeongdong and popular restaurants.

Meanwhile, Shinsegae Department Store gave away tickets to the musical “Jump” held in its main store’s culture hall to customers with Chinese passports on a first-come, first-served basis.

The musical is extremely popular with Chinese.

Also, Shinsegae operates a Korean Traditional Culture Experience Zone, which offers games such as neolttwigi, which involves jumping up and down on either side of a seesaw, and jegichagi, a Korean shuttlecock game, in its culture hall from Feb. 7 to 13.

It will also allow foreign shoppers to experience making hanji, the handmade Korean traditional paper made from mulberry trees.

All the arrangements will be taken care of by VIP concierge staff at the Galleria Department Store, which has seen a 83 percent increase in sales to Chinese over the past three years.

Hyundai Department Store’s Apgujeong branch in Gangnam provides an additional 5 percent discount until Feb. 28 to Chinese shoppers using the UnionPay Credit Card. It is also providing gift certificates and free gifts based on the amount of purchases.

“Based on the main branch, the average purchase of Chinese customers is 360,000 won, much higher than the 164,000 won of Japanese customers,” said Chun Il-ho, global marketing manager at Lotte Department Store. “We have to do everything to tailor ourselves to Chinese customers.”