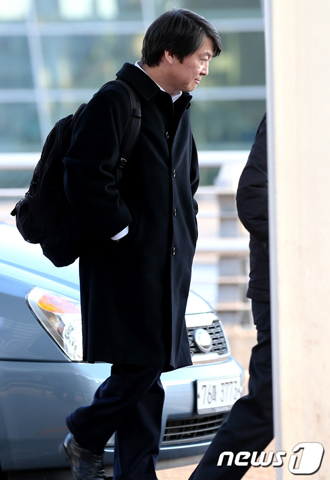 The controversy over the political neutrality of government-approved textbooks will revive after new guidelines were released by a state curriculum evaluator yesterday.

The state-run Korea Institute for Curriculum and Evaluation yesterday held a public hearing and announced its proposed guidelines on textbooks to ensure political neutrality. Under its proposal, content describing Ahn Cheol-soo, a software mogul and former independent presidential candidate, will likely be removed from textbooks starting next year.

The controversy over politicians in textbooks began last July when the institute recommended publishers of eight middle school textbooks to remove poems by Doh Jong-hwan, a celebrated writer. Doh became a proportional representative of the Democratic United Party in the April 2012 legislative election.

The institute said the recommendation was to ensure political neutrality of textbooks.

A negative reaction allowed the poems to remain in the textbooks.

The issue was revived later that year after Ahn declared in September he was running for president as an independent.

In school books, Ahn is described as a positive role model. They say he is “the most sought after interviewee by the media” and “a professor who decided to give up the profession of medical doctor, which guarantees economic stability and social prestige, to become a computer programmer.” In a middle school textbook, Ahn is described as a “talented computer program developer and a selfless person.”

The textbooks were written long before Ahn decided to enter politics.

Ahn’s presidential bid was short-lived: He pulled out last Nov. 23, a month before the election. But the Ministry of Education, Science and Technology decided to create new guidelines for political neutrality and gave the job to the institute.

The guidelines presented yesterday stated that textbooks must not name or show photos of individual politicians unless absolutely necessary. Exceptions can be made when it is necessary to serve the purpose of a lesson, and facts about politicians, but not subjective evaluations, can be run when two-thirds of the review board can come to an agreement.

The new guidelines provide more specific standards on who is considered a politician. Under the proposal, that label applies to independent presidential candidates as well as presidents, lawmakers, cabinet members, members of political parties, politically appointed public servants, heads of local governments and members of local legislative councils. Politicians from foreign countries and North Korea will also be subject to the same guidelines.

Artwork and literature by politicians can be included as long as they were created before the artists or writers became politicians. Works that depict political beliefs or ideology of the creators, however, won’t be allowed.

The textbooks will also be free from content written by a third party about a politician unless it is needed to achieve the goal of the lesson. Only facts are allowed, according to the guidelines.

Experts questioned the effectiveness of the measure. “They were still vague because of many exceptions,” said Son Dong-hyun, professor of philosophy at Sungkyunkwan University. “We will still see more controversies.”

If the new guidelines are finalized and approved before the end of June, they will be used starting in August for high school textbooks for the 2014 academic year.