Top court choice refuses to give up

Top court choice refuses to give up 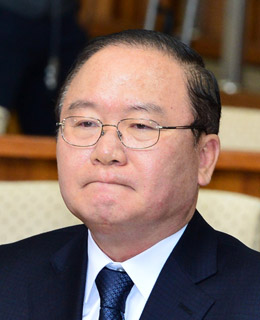 Lee Dong-heub, the nominee for chief justice of the Constitutional Court who was picked by President Lee Myung-bak and endorsed by President-elect Park Geun-hye, said he’s not backing down after allegations of pocketing expense money and intends to be confirmed for the job.

“After the confirmation hearing last month, groundless allegations and suspicions were spread creating a ‘Monster Lee Dong-heub,’?” Lee said in an exclusive interview with the JoongAng Ilbo yesterday. “I have lived a blameless life, but now my dignity has been stolen from me.

“For me, what matters is not the position,” he said. “Restoring my reputation is more important than anything else.”

Lee has not spoken to media since the Jan. 21-22 confirmation hearings, at which he was asked if he pocketed expense money from the court and skimped on air tickets to pocket the difference. Lee denied the allegations and said if they were proven, he would step down. The 61-year-old former justice of the Constitutional Court gave an interview to the JoongAng Ilbo at his house in Bundang, Gyeonggi, yesterday.

Political analysts expected Lee to walk away from the nomination after his harsh grilling, especially from opposition Democratic United Party lawmakers. Even some ruling Saenuri Party members pressured him to quit.

Lee said he considered walking away. “I considered stepping down voluntarily not to drag the appointment on anymore,” Lee said. “But I’m concerned that if I step down, it could be common practice in politics to exaggerate suspicions about a presidential nominee.”

Asked what he thought about the vacancy at the head of the nation’s Constitutional Court, Lee said, “It is very regrettable.”

But he added, “It’s not my duty to step down as a public servant. I am awaiting a legal procedure of the legislature, because it’s been more than two weeks since the hearing.”

Under the law, to appoint a Constitutional Court chief justice, a ministerial-level post, more than half of the sitting lawmakers have to vote in favor of the nomination. There was no vote following Lee’s confirmation hearings.

On Monday, Hwang Woo-yea, the Saenuri Party’s chairman, demanded the main opposition Democratic United Party agree on convening a vote. The DUP replied that Lee “is not qualified for the vote.”

Lee said he is willing to return all of the expenses he was reimbursed over the past six years, which amount to about 300 million won ($276,497).

“Although I have never embezzled or received even a penny more than I was entitled to, it was wrong to deposit the money in my own account,” Lee said. “I think it could be an opportunity for the Ministry of Strategy and Finance to revise its instructions on managing the money.”