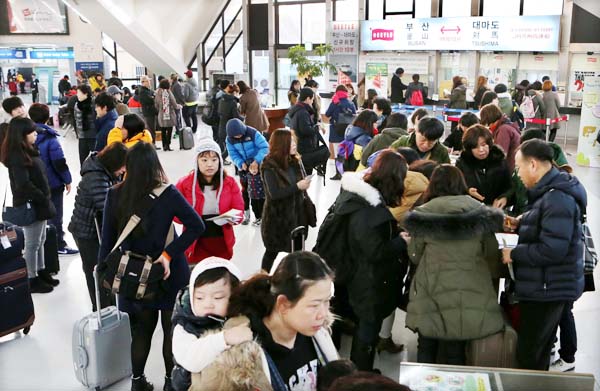 Tourists crowd the Busan International Ferry Terminal on Jan. 17, waiting to get on a cruise to visit Japan’s Tsushima Island, which takes around two hours to reach by ship. The number of visitors to Tsushima on a day trip is on the rise, reaching 290,000 last year, an almost fivefold increase from the year before. By Song Bong-geun


Early in the morning on Jan. 26, a large crowd of people was seen holding round-trip tickets to board a ferry at the Busan International Ferry Terminal. Workers from tour agencies were busy instructing their customers on customs procedures before they boarded their cruise.

The visitors were on a one-day trip scheduled for Japan’s Tsushima Island, located 49.5 kilometers (30.7 miles) off the coast of Korea’s second-largest city, as it only takes less than two hours by boat to reach the island in the neighboring country.

The number of visitors to Tsushima on a day trip last year dramatically shot up to reach 290,000, showing an almost fivefold increase from the previous year, when a mere 60,000 Korean visitors went to the island in the wake of the massive earthquake in the northeastern part of Japan in March 2011.

Under a general tour program, it costs less than 100,000 won ($94) for a round-trip ticket and other expenses, including lunch and transportation on the island. Some agencies offer customers a 79,000 won program that includes fees for a tour bus that visits popular sites on the island.

“The program was appealing as we are able to visit a foreign country with domestic traveling expenses,” said Lee Hyo-gil from Busan, who was with his wife at the terminal.

A 31-year-old worker, named Lee Ju-young, from Busan, said it was her third visit to the island.

“Taking advantage of shopping at duty-free shops, going to the Japanese island on a single-day trip with little time and expense spent can actually produce some gains,” said Lee, who had purchased cosmetic products at the ferry terminal worth 150,000 won prior to getting on the cruise.

The larger expansion of the touring business to Tsushima began with last year’s end of the monopoly a single operation had over the overseas tour.

The ferry routes between Busan and Tsushima Island had been monopolized by one domestic ferry service company, Daeah, operating a ferry service to Tsushima five times a week.

Now two other ferry transportation companies have joined in the business and compete for better and cheaper tour services.

Ferries from Busan arrive at two locations on the island - the port town of Izuhara in southern Tsushima and Hitakatsu, on the northern side of the island.

Izuhara offers many sites with historical significance to Korea as it was once a place where patriots during the end of the Joseon Dynasty (1392-1910) were exiled to by soon-to-be colonizers.

Potential tourists are now cleverly using the cheap tickets to get the most out of their single-day tour by shopping at duty free shops at Busan’s Lotte Department Store as part of their trip.

With products priced at 80 percent of the original price, one can still save around 80,000 won from buying goods worth 400,000 won. The monetary limit for duty free during a single trip is $400.

“Those who visit the island for the first time usually tour historical sites while second- and third-time tourists focus on duty-free shopping,” said Park Eun-gyeong, director at the Busan-based tour agency Tour Doctor.

Some are critical of the rising popularity of the Tsushima touring program.

“Many tourists on a single-day trip are not aware of the historical context of the island. It has had a long connection with Korea, but they only choose to go there because it’s cheap,” said Hwang Baek-hyun, CEO of the Busan-based Balhae Tour Agency.