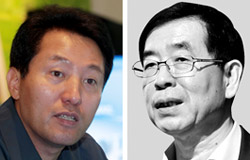 The Seoul Metropolitan Government said yesterday they recently published a white paper that reviewed former Mayor Oh’s Han River Renaissance Project based on reports written by six professors who studied changes in the ecosystem around the Han River areas that were impacted by the Han River project.

The white paper recognized that since the 1960s construction projects have destroyed nature in the area, but mostly focused on the Han River Renaissance Project that former Mayor Oh spearheaded.

Civil engineering professor Park Chang-keun, from Kwandong University, who helped make the report to the city, defined Oh’s Han River project as “a project that failed to preserve the nature of the Han and failed to create any valuable outcomes though it spent a huge amount of taxpayer money.”

The white paper said that a series of large-scale construction projects that had been carried out by former Mayor Oh, including the Floating Islands in Banpo, southern Seoul, which were the first completed piece of the city government’s Han River project, and the West Sea Waterway Project, which aimed to link the Han River with the Yellow Sea and ports in China to operate luxury cruise ships to attract more international tourists. It said they were operated without consideration for environmental effects and safety.

It concluded they had a negative impact on the ecosystem of the areas and also threatened safety on subway lines Nos. 2, 5 and the Bundang Line.

The white paper also said bike lanes that were created in the Gangseo Eco Park in western Seoul damaged the ecosystem around the area.

It added that the city government did a poor job of considering the environmental effects because many eggs of narrow-mouth frogs were found when the bike lane was being built.

“There must be some political reasons for this white paper series because it is pinpointing works that were done by former Mayor Oh,” a spokesman for Oh Se-hoon told reporters.

“The mayor definitely wants to be re-elected in 2014.”