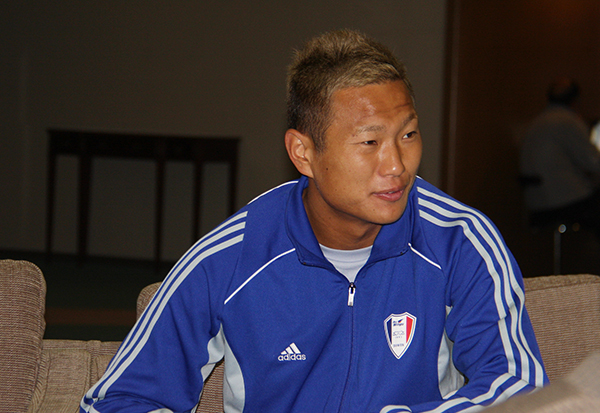 
Jong Tae-se has three countries he can call home. Born and raised in Japan, he played for the North Korean national team and is now about to start a career in South Korea, the birthplace of his father.

But, in an interview with Ilgan Sports, Jong said his identity is based not in a country, but in the Jainichi (Korean-Japanese) community. He said if he does get married, it will be to another Jainichi.

Jong, 28, a key contributor to North Korea’s first World Cup appearance in 44 years at the 2010 South Africa World Cup, joined the Suwon Bluewings on Jan. 10 on a three-year contract. It’s a move that some hope will help defuse the tensions between the two Koreas.

His affability may indeed help with that. Oh Jang-eun, a Bluewings midfielder, said Jong adjusted to life on the team on his first day.

He is now in Kagoshima for the Bluewings’ overseas training session, a southwestern Japanese city where the interview was held on Monday. Even from there, he was able to include Park Ji-sung, the South’s most popular football player who currently plays for the Queens Park Rangers, on his list of friends.

Jong said that he called Park, 31, to encourage him as his English Premier League team struggles. “I said to him, ‘You might be having hard time now but keep your chin up,’” Jong said, recalling a phone conversation.

Q. Are you Japanese, South Korean or North Korean?

A. Playing in the K-League has made that more difficult to answer. Simply put, I’m North Korean. I have thought so since my childhood.

Do you feel alienated anywhere - be it in Japan, South Korea or North Korea?

That’s a good question. When I’m with Japanese people, I’m not like them. I’m different from them down to my bone structure. (His mother is also of Korean descent.) That doesn’t mean that I’m South Korean. Things are the same when I go to North Korea. If you have to define your identity by country, there’s no country that I belong to. Although it’s not a country, being a Jainichi is my identity.

It’s alright. Many Turkish people who live in Germany are in the same situation as me. They’re not recognized as Germans in Germany or as Turkish back home in Turkey. There are many people like me in all parts of the world.

So, not belonging anywhere has its own merits for you?

It depends how you think. You can experience things that others can’t. But when it comes to passports, that’s really difficult. It’s very difficult to go anywhere carrying a North Korean passport. They look at me as if I were a criminal. I’ve never had an easy time passing through immigration. In Japan, when I leave for a foreign country, they ask me to refrain from going to North Korea. It makes no sense to ask a person with a North Korean passport to refrain from going to North Korea. But, that’s the reality.

You’ve played football in North Korea, Japan and Germany. How do their styles compare with South Korea?

In Japan, they don’t challenge for possession as strongly as in South Korea. In Germany, they practice as if it were the real thing. If they score a goal in practice, they like it as much as if they had scored in a real match. North Korea observes world football, but their training method is outdated. It’s old-fashioned. They warm up with the same routines every day and the training programs have many repetitions. They have many training programs where they spend many days and nights together and strictly abide by seniority among the players, just like they do in South Korea. But because they have a longer training period than South Korea, the players are more like a family.

You have two nicknames, Human Bulldozer and Inmin Rooney. Can you pick one over the other?

I like both. In fact, I created the nickname Human Bulldozer after consulting with fans. The nickname Inmin Rooney has been reported by foreign media and even Rooney (Wayne Rooney, the Manchester United striker) knows about it. They’re good at names, because they used the word Inmin. (Inmin is a North Korean term for “people.”)

What kind of chats do you have with your Suwon teammates?

We talk about women, football and TV shows. Sometimes the North Korean issue comes up, but not that many show an interest in it. There’s no reason for us to talk politics.