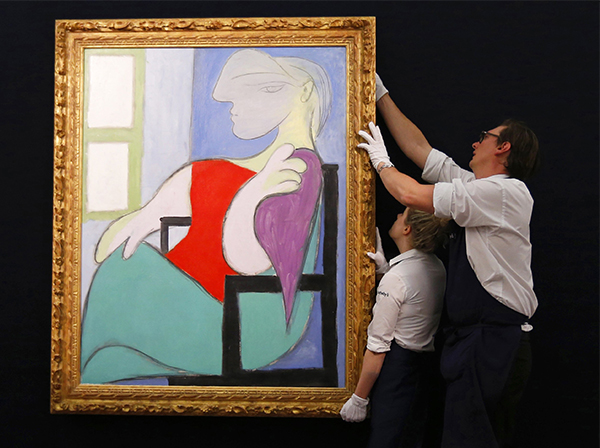 Sotheby’s workers straighten “Femme assise pres d’une fenetre” from 1932 by Pablo Picasso at Sotheby’s in London before an auction held on Tuesday. The event was the first in a series that should help reveal collectors’ appetites for new works. [REUTERS/NEWSIS]


LONDON - A Pablo Picasso portrait of his mistress and “golden muse” Marie-Therese Walter sold for 28.6 million pounds ($44.8 million) on Tuesday, leading a patchy Sotheby’s auction of impressionist, modern and surrealist art where some lots disappointed.

The sale was the first of a series to be held in London this month by Sotheby’s, rival Christie’s and smaller auction houses in the latest barometer of the strength of the high-end art market.

Prices for the most sought-after works have soared in recent years despite broader economic concerns, with collectors in China, Russia and the Middle East joining more established patrons in Europe and the United States.

Subtracting the buyer’s premium of over 10 percent, the amount realized for the 1932 Picasso came toward the lower end of presale estimates of 25 million to 35 million pounds.

Nonetheless, it was comfortably the top lot of an evening when a series of works on paper by Austrian artist Egon Schiele arguably stole the limelight.

His “Lovers (Self Portrait With Wally)” of 1914 fetched 7.9 million pounds, an auction record for the artist for a work on paper.

Also sold by the Leopold Museum in Vienna was his “Self-Portrait in Green Shirt with Eyes Closed,” which sold for 5.1 million pounds, well above expectations of between 1.8 million and 2.5 million pounds.

The combined tally for Schiele works, sold by the museum to help settle a long-running restitution case involving art deemed to have been stolen by the Nazis in the 1930s, was 14 million pounds.

Other lots fared less well, however, most notably Max Beckmann’s “Before the Ball - Two Women With a Cat” which went unsold despite presale estimates of 5 million to 8 million pounds.

Several other paintings were sold at around the low end of expectations.

Overall, the evening brought in 121.1 million pounds in sales, within expectations of 103 million to 149 million.