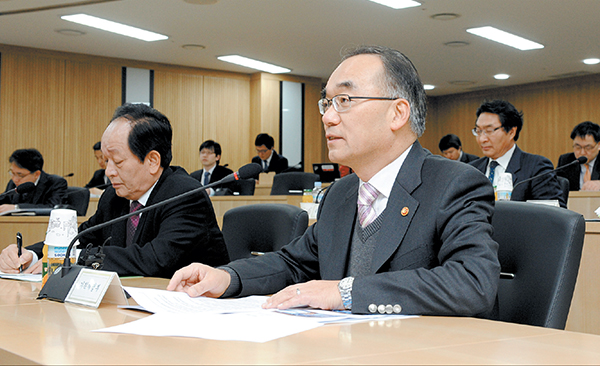 Finance Minister Bahk Jae-wan speaks at the last anti-inflation meeting of the current government yesterday at the government complex in Sejong City. Government officials in Sejong and Seoul held their first video conference since the relocation of six government branches last year. [NEWSIS]


Finance Minister Bahk Jae-wan said he regrets not being able to bring prices down to the level desired by consumers due to recent weather conditions and rises in international raw material prices.

“Because of seasonal factors, including the arrival of the Lunar New Year this weekend, cold spells, international oil and grain prices and hikes in public utility rates, there are worries of further price hikes this month,” Bahk said at the final anti-inflation meeting of the Lee Myung-bak administration yesterday.

But the current government did its best to keep inflation in check, he said, by holding a total of 53 anti-inflation meetings since 2011.

In November and December 2011, growth in consumer prices reached 4 percent. According to the Korea Center for International Finance (KCIF) yesterday, 10 foreign investment banks, including JP Morgan and Nomura, forecast that the country’s consumer prices would grow by 2 to 3 percent this year.

The CRB index, a major gauge of raw material prices, came to 303.99 as of the end of January, up 2.9 percent from a month earlier.

Major nonferrous metals led the increases, with the prices of nickel and tin rising 7.6 percent and 7.2 percent respectively over the period.

The price of crude oil also jumped, with West Texas Intermediate crude trading at $97.49 per barrel at the end of January, up 6.2 percent from the previous month. The price of Dubai crude also climbed 2.8 percent to $110.8 per barrel. 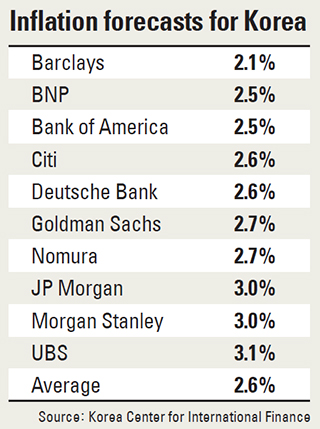 Market watchers said the recent increase in the price of raw materials is attributable to signs of economic recovery in major economies like China and the United States.

The Purchasing Managers Index (PMI) for China’s manufacturing sector, a gauge of business confidence, reached a two-year high of 51.9 in January, according to data released by British bank HSBC yesterday.

The PMI is based on a survey by corporate executives in charge of purchases. A figure above 50 indicates improvement while a figure below means business is in decline.

“The improved outlook on the economy is a key factor related to the global raw material prices,” said Kim Young-jung, a researcher at Woori Futures. “Demand for crude oil will increase down the road on the back of the economic recovery.”

Analysts said the increase in raw material prices will hamper Korea, Asia’s fourth-largest economy, due to the manufacturing sector’s heavy dependence on imports.

“While the appreciation of the local currency may allow Korea to recoup some of the losses from the price hikes, it will still become a burden when crude prices continue to surge,” said Lee Seung-joon, an analyst at HI Investment and Securities.

Meanwhile, the government will crack down on unfair price increases by children’s day care centers and also by food manufacturing companies as part of efforts to stabilize prices, officials said at the anti-inflation meeting.

According to a report by the Ministry of Health and Welfare, it will enhance monitoring of parents’ spending on education for children between ages three and five. The ministry will set ceilings on such spending by city and province to help keep parents from paying more than they are supposed to.

The government started providing 220,000 won ($202.20) for every household with children in the age group from this month regardless of income levels.

Childcare facilities that demand extra payments from parents will be suspended for up to three months if caught.

As for public utility fees, the Finance Minister said the government will try to minimize possible raises during the first half of the year. Provincial governments are planning to increase public transportation fees and water bills soon.

Yesterday’s meeting was held between government officials at the Sejong Government Complex and those in Seoul via video conference for the first time since relocation of the Ministry of Strategy and Finance in December.