Tallying up the cost of a brawny won

Tallying up the cost of a brawny won 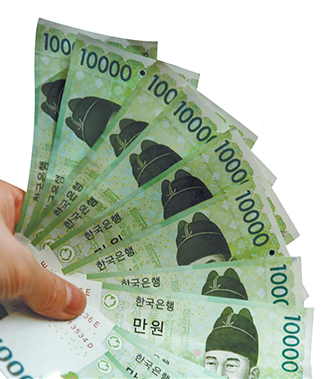 The Korean currency in January appreciated to its strongest level in 18 months against the U.S. dollar at the same the yen fell to its weakest point in 31 months.

Although the won has recently weakened somewhat, many exporters have been hit harder by the depreciation of the Japanese yen as they become less price competitive.

Yet it is small and midsize companies that are the biggest losers.

Won up yen down

The value of the yen has fallen nearly 14 percent since Tokyo began easing in September. This month alone, the yen has weakened by more than 6 percent, edging close to 95 against the dollar.

“Recently, appreciation pressure on the won has somewhat weakened, largely thanks to foreigners selling their won assets and the possibility of stronger control of foreign currency exchange by the financial authorities,” said Park Hyung-jung, a Meritz Securities economist.

In fact, selling by foreigner investors on the Seoul main bourse helped the won depreciate by 1.1 to close at 1,088.1 against the dollar yesterday.

The won’s appreciation may have eased, but most of the damage has already been done.

According to a Financial Supervisory Service (FSS) report yesterday, many of the 722 small and mid-size export companies surveyed said they have been hurt.

The industry likely to have been hit the hardest is IT, whose break-even point is 1,085 won against the dollar. The steel and metal industry is barely holding its head above water as its break even point is barely above last month’s average at 1,067 won, while the automobile and shipbuilding sectors have break even points of 1,057 won and 1,055 won, respectively.

The Korea Chamber of Commerce and Industry in its own survey had a gloomier outlook.

That means companies are already suffering losses every time they sell a product in the global market.

The FSS report, especially, showed that if the won appreciates to 1,000 against the dollar this year, small- and mid-sized exporters will see operating profit fall 2.3 percentage points to 3.2 percent on average.

More than 61 percent of the companies that took part in the FSS survey said they saw their operating profit fall between 6 percent and 30 percent last year because of won appreciation.

Forty-five percent said they expect their exports to shrink 10 percent to 20 percent this year due to the appreciation of the won.

Small- and mid-sized companies are not the only ones affected by currency volatility.

The nation’s top conglomerate and tech giant Samsung Electronics projected that the appreciation of the won will eat into its operating profit by 3 trillion won this year, while Japanese automaker Toyota Motor raised its profit forecast by 10 percent to 860 billion yen ($9.2 billion).

Some market observers, however, note that the Korean won should move back to within a more normal range in the long run. For example Korea will likely benefit once the U.S. and Chinese economies recover. Even though the Korean won could appreciate further, the increase export volume would likely make up for losses attributable to weakened price competitiveness. Even if the global economy continues to deteriorate, that would make it more likely that investors would move to the yen and cause the Japanese currency to appreciate.