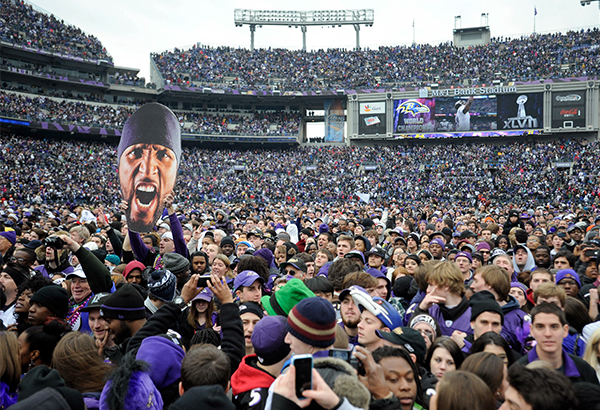 
BALTIMORE - Baltimore celebrated with its Super Bowl champion Ravens on Tuesday, with thousands of fans in purple lining the streets and packing the team’s stadium for a celebration.

Fans filled the square in front of City Hall and cheered when the team arrived and when players held the silver Lombardi trophy aloft. The Mayor’s Office of Emergency Management estimated that 200,000 people took part in the celebration in Charm City, including at City Hall, along the parade route and at the stadium.

Coach John Harbaugh thanked the fans for their support, and safety Ed Reed sang the melody of Eddie Money’s “Two Tickets to Paradise.” Retiring middle linebacker Ray Lewis, the only current player to have started with the team when it came to the city from Cleveland in 1996, told fans the team had fulfilled a promise to go to New Orleans and win.

The players were about an hour late arriving, but fans waited to see them pile into military vehicles and set off on their drive to the stadium. The city shot off purple and white confetti as the parade started and the Queen song “We Are the Champions” played over a loudspeaker. Quarterback Joe Flacco and several other players rode in their own camouflage-colored military vehicles, while others stood on a float decorated like a football field with a yellow goal post.

Lewis had a position of honor in a military vehicle that brought up the end of the procession. He touched his hand to his heart and gave fans a double thumbs-up as he started on the parade route. Fans followed behind, surrounding the back of the vehicle.

Fans wore every article of purple clothing imaginable. In addition to team jerseys, people were dressed in purple hats and scarves, purple Mardi Gras beads, and purple wigs. One man wore a Ravens flag as a cape, and many women came wearing purple lipstick and eye shadow.

Lewis Neal, 59, who was born and raised in Baltimore, was decked out in a purple tie and vest to purple pants and shoes. He said he went to the parade after the team won its first Super Bowl championship in 2001. This time was smaller, he said, but still special.

“My heart goes out for them,” said Lewis, who said he had tears in his eyes Sunday when the team beat the San Francisco 49ers 34-31.

Nancy Monseaux, 63, a Baltimore resident for nearly four decades, cheered the team on Pratt Street, where fans lined the sidewalk five or more people deep in some places. Monseaux, who held a sign that said “Doubt the Ravens nevermore,” said she wanted to come to show her support for the team.

“These boys earned it,” she said of the victory, cheering as members of the team passed.

Some fans along the parade route said they also planned to go to the team’s M&T Bank Stadium. But the stadium, which usually seats 71,000, reached capacity around 12:30 p.m., a police spokesman said, and late-arriving fans were turned away.

When the team did arrive, they treated fans to a thank-you celebration that lasted just over a half an hour. Lewis emerged from a tunnel onto the field, handed off the Lombardi trophy and did his signature dance, “The Squirrel.” He thanked fans for their love of the team and said he wanted to win the Super Bowl to repay Baltimore for everything it’s done for him.

“There is no place on this earth that’s better than Baltimore,” he told the crowd.