Lee Dong-heub, the presidential nominee for chief justice of the Constitutional Court, has faced a barrage of criticism from opposition lawmakers and civic activists after he refused to walk away from the contentious nomination.

The 62-year-old former justice of the Constitutional Court has been picked by President Lee Myung-bak to lead the nation’s top court and endorsed by incoming president Park Geun-hye as well. 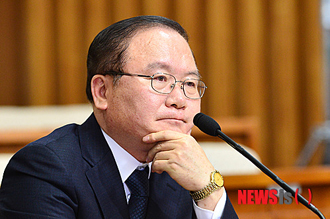 However, at the Jan 21-22 confirmation hearings, he was grilled with questions on allegations that he pocketed expense money from the court and skimped on air tickets to pocket the difference.

Lee denied the allegations and said if they were proven, he would step down.

Lee told the JoongAng Ilbo in an interview on Tuesday that he won’t give up the post. Lee said he was awaiting a legislative vote for his nomination and promised to return all of the expenses he was reimbursed over the past six years.

He also claimed that his reputation has been seriously damaged by the recent confirmation hearing, and asserted he didn’t commit any grave wrongdoings.

After the report, the main opposition Democratic United Party lashed out at Lee and demanded his immediate resignation.

“It is totally ridiculous,” Yun Kwan-seok, a spokesman for the DUP, told a press meeting yesterday. “Everybody is now aware that he is disqualified, incompetent and inappropriate for the position after the confirmation hearing.

“Nonetheless, Lee didn’t express regret or take any responsibility,” Yun said. “We demand Lee immediately step down and not cause any further public outcry.”

The People’s Solidarity for Participatory Democracy, a major association of liberal civic activists, filed an accusation against Lee for embezzlement yesterday.

In its accusation application, the association claimed “When Lee was a justice at the Constitutional Court, he had the so-called special-purpose money from the court deposited into his personal account, about three to five million won ($2,753-$4,589) every month, totaling 320 million won over the years. While spending the money in the account for personal uses .?.?. he has not submitted documents to the court that proves he spent the money for public purposes.”

An accountant for the Constitutional Court said at the confirmation hearing that they received receipts and documents accounting for Lee’s previous spending of the money, but she didn’t look into every single detail of the document.

The accountant didn’t present the document at the hearing.

Despite mounting criticism over the nominee, President-elect Park Geun-hye asked ruling party lawmakers to “not damage the reputation of a presidential nominee anymore,” although she didn’t specifically point to Lee.

“I want a confirmation hearing to allow a presidential nominee to show his or her actual ability and philosophy, not just focus on excessively hurting his or her reputation,” Park said at her meeting with ruling Saenuri Party lawmakers and senior members yesterday.

“I ask you to make efforts to hold a vote through a legal procedure.”

Under the law, to appoint a Constitutional Court chief justice, a ministerial-level post, more than half of the sitting lawmakers have to vote in favor of the nomination. There was no vote following Lee’s confirmation hearings..