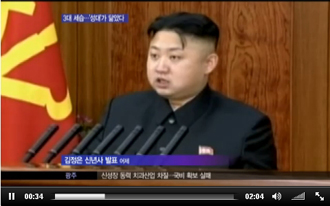 With rising expectations that North Korea will test a nuclear device, a special envoy of leader Kim Jong-un reportedly paid a secret visit to Beijing yesterday.

“As far as I know, a high-ranking envoy from North Korea arrived in Beijing yesterday morning by airplane,” a source in Beijing told the JoongAng Ilbo yesterday. “Although we haven’t confirmed specific identification of the envoy, we were told he is an official of the ruling Workers’ Party’s international affairs department.”

If that’s true, it would be the first visit by a North Korean official to China since the UN Security Council unanimously passed Resolution 2087 against North Korea on Jan. 22, which led to a series of retaliation threats by Pyongyang.

“We assume that Pyongyang intends to explain its position on the alleged nuclear test plan and figure out the feeling in the Chinese leadership over the matter,” the source said. “They could try to gauge the level of possible sanctions that Seoul and Washington are mulling to take against the regime.”

A South Korean government official said, “We have not been informed of anything about the envoy.”

The official added: “If the North had indeed sent such an envoy, it would mean North Korean leader Kim Jong-un has not made the final decision on pressing the button. There would be a possibility that the regime could scrap its plan if China succeeds in dissuading it.”

A senior South Korean diplomat also told reporters yesterday that China “is continuously trying to dissuade Pyongyang in its own way.”

“China has the clear perception that the situation is very grave,” the diplomat said. “The South Korean and Chinese governments have reached a consensus in recent contacts that the North should not go ahead with its nuclear weapons test, and denuclearization should be maintained on the Korean Peninsula.

When asked whether the nuclear test will happen or not, the diplomat said, “Although the North didn’t explicitly say it would, the level of its rhetoric and activities imply it wouldn’t end this situation with those words.”

John Kerry, newly appointed U.S. Secretary of State, and his Chinese counterpart Yang Jiechi talked over the phone yesterday for the first time and agreed they need to work together in dealing with North Korea’s threats to carry out its third nuclear test.

Victoria Nuland, spokeswoman for the U.S. State Department, told a press conference, “[Kerry and Jiechi] discussed the continued provocative rhetoric coming from the DPRK [North Korea]” and agreed to ensure that North Korea faces “further consequences” if it violates its international obligations by conducting another test.

South Korea’s Ministry of National Defense said yesterday a preemptive strike is also a possible option for the military in case Pyongyang attempts a nuclear attack on the South.

“If the enemy [North Korea] is actually about to use a nuclear weapon, a pre-emptive strike is also one of our possible reactions,” Jung Seung-jo, chairman of South Korea’s Joint Chiefs of Staff, said at a briefing of the National Assembly’s National Defense Committee yesterday.

Jung attended the briefing on behalf of Defense Minister Kim Kwan-jin, who was on a trip to Saudi Arabia.

Jung added that Seoul and Washington estimate Pyongyang has produced a total of about 40 kilograms (88 pounds) of plutonium.