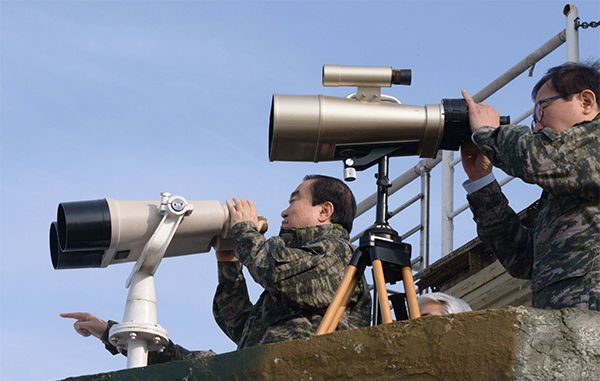 Moon Hee-sang, left, interim chairman of the main opposition Democratic United Party, observes North Korean territory through binoculars from a guard post on Yeonpyeong Island, one of five border islands near the Northern Limit Line in the Yellow Sea. DUP leaders made a visit yesterday to the island to express their concerns about security. [Joint Press Corps]


President-elect Park Geun-hye will meet with the heads of the ruling and opposition parties today to discuss the country’s security situation and North Korea’s expected nuclear test.

The meeting among the three leaders, including Saenuri Party Chairman Hwang Woo-yea and Moon Hee-sang, interim head of the Democratic United Party, will take place at 2 p.m. at the National Assembly.

It will be the first meeting between Park and the DUP leadership since her victory in December’s presidential election. It could also serve as a first step to fulfill Park’s pledge to create a consultative conference with the leaders of the ruling and opposition parties on state affairs.

Earlier yesterday morning, Park proposed an urgent meeting among leaders of the ruling and opposition parties, and it was arranged and announced later in the evening.

“The Korean Peninsula is under a serious threat by the North’s nuclear test plan,” said Cho Yoon-sun, spokeswoman for Park. “The president-elect proposed an urgent meeting of the ruling and opposition parties to discuss the issues.”

Cho said the participants should be the leaders of the Saenuri Party and main opposition Democratic United Party, the head of the foreign affairs, trade and unification committee of the National Assembly, the chief negotiators from the two parties on that committee and Park’s transition team’s defense and foreign affairs strategists. “Park hopes a bipartisan meeting will take place as soon as possible,” Cho said.

Later in the day, the DUP’s spokesman Park Yong-jin said the bipartisan meeting was scheduled for 2 p.m. today. While the president-elect proposed a larger number of lawmakers and aides to attend, it was eventually narrowed down to a meeting among the three leaders.

The meeting is an about-face from Park’s previous stance that the Lee government should handle sensitive security issues until the day she is sworn in. A close aide to Park said the president-elect believes the time has come for her and the ruling and opposition parties to discuss the issue because the threat became more serious. 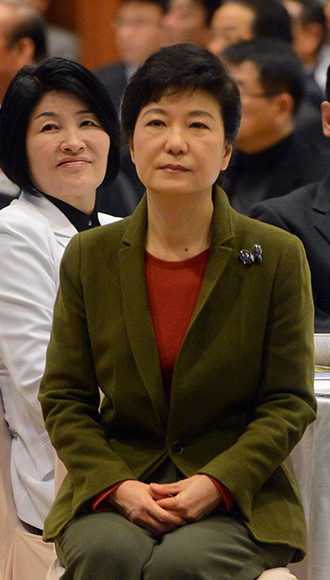 Park stressed the importance of internal unity in the face of a security crisis. “Tensions are rising due to the North’s nuclear issue,” Park said in a meeting with Saenuri lawmakers and heads of local chapters. “In this situation, we must join our efforts and wisdom so that politics can fulfill its purpose to serve the people.”

The DUP yesterday welcomed Park’s proposal but said it actually had the idea first.

“Park’s proposal is meaningful because the people’s insecurity has grown over the forthcoming nuclear test by North Korea,” said the DUP’s spokesman Park. “The DUP believes national security is the highest priority above all. We agree to the larger framework of the proposed meeting and will participate in the process.

“And we want to point out that the DUP made the proposal first that President Lee Myung-bak, President-elect Park and the heads of the two parties meet in a four-party talk,” he said. “We will regard Park’s proposal as an official response to our acting leader Moon’s request made earlier in the morning.”

The largest opposition party, which has promoted an engagement policy toward North Korea, has turned increasingly conservative as tensions on the peninsula escalated over Pyongyang’s threats. It adopted yesterday a Declaration on the Korean Peninsula’s Peace and Security urging the North to immediately stop any provocative actions, calling a nuclear test a threat to the international community.

The DUP also said the South Korean government’s priority should not be new measures to sanction the North, but to come up with the most effective means to stop the nuclear test. It said an inter-Korean dialogue is crucial to this end.

The DUP also said it wants the Park administration and the Barack Obama administration of the United States to come through with a breakthrough in the nuclear standoff. The party also urged the two Koreas and other countries concerned about the affairs on the peninsula to resume talks.

Its proposal for the four-way talks was included in the declaration. The declaration was the latest in a series of DUP attempts to revamp its reputation of being too lenient with the North.

The DUP leadership visited yesterday Yeonpyeong Island, a northwestern island that was shelled by North Korea in November 2010.

The peace and security declaration was supposed to be announced from there, but the weather delayed their trip to the afternoon, so the declaration was adopted at a leadership meeting at the National Assembly in the morning. “The visit to Yeonpyeong was to demonstrate the DUP’s strong will to peacefully resolve the crisis prompted by the North’s nuclear test plan,” said Jeong Eun-hye, deputy spokeswoman of the DUP, in a press release.

Fourteen senior DUP officials including the interim chairman visited the island, she said.

“The third nuclear test of the North could bring a catastrophe to the Korean people,” Moon was quoted as saying. “The ruling and opposition parties must work together to stop it.”

On Tuesday, the DUP leadership visited an airbase in Cheongju, North Chungcheong, and thanked the troops. On Monday, Moon issued a stern warning to the North to stop its nuclear brinkmanship.