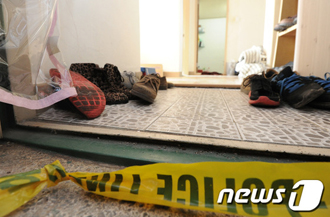 The 24-year old man who allegedly asphyxiated his family and tried to make it look like a group suicide was after life insurance payouts, police said.

The father, mother and brother who succumbed to the drugs he allegedly knocked them out with and the coal lit while they were sleeping on Jan. 30 had 32 life insurance policies worth over 2.5 billion won ($2.29 million) in payouts if the plan had succeeded.

The parents also had assets of an estimated 1 billion won in cash, police said, and owned real estate worth nearly 2 billion won.

The North Jeolla Provincial Police Agency reported Tuesday that the father and mother of the suspect, identified only by his surname Park, owned 11 insurance policies each while his 26-year-old brother had 10 insurance benefits. Investigators said the three paid 3 million won a month in insurance premiums.

Police said they didn’t know why the family bought so much insurance, but said the parents paid for the premiums of the older brother. They had been buying the policies since as early as 1996.

During questioning, which is ongoing, Park said family discord drove him to commit the alleged crime. A police official was quoted by Yonhap as saying that Park always considered himself “unfortunate” and “treated harshly by a strict father,” who was a retired army major. The suspect also alleged his mother favored his brother over him.

The police said Park did not show signs of being a psychopath during a six-hour interrogation session conducted earlier this week.

It was also discovered Tuesday that the suspect’s uncle, the younger brother of his mother, helped Park cover up the crime. He was identified as a police officer in Buan County, North Jeolla, surnamed Hwang.

According to investigators, Park confessed to Hwang that he had asphyxiated his parents and brother just a few hours after they died. The suspect asked the 42-year-old uncle to clean up his Hyundai Santa Fe SUV, in which he transported the coal allegedly used for the murder.

The next day Hwang allegedly asked three of Park’s friends to clean the vehicle’s interior and exterior in a bid to get rid of the evidence. Police would eventually find coal dust on the vehicle’s floor.

“I decided to cover up the crime as my nephew is the only family member alive following the death of my sister, brother-in-law and older nephew,” Hwang was quoted as saying by the police.

The police booked Hwang and the three friends for destroying evidence and said they would question the uncle further to see if he had any other motives.