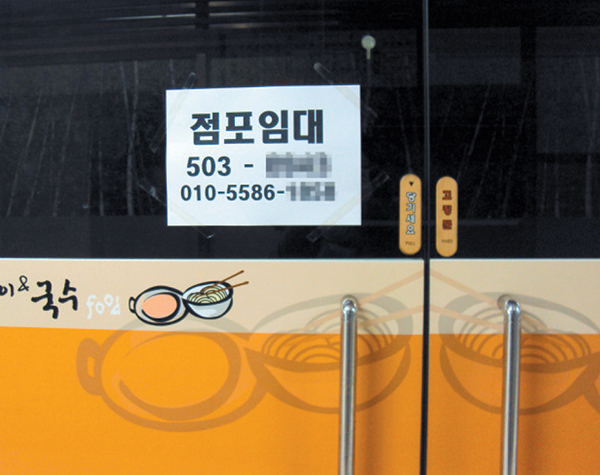 A sign on the door of a restaurant near the Gwacheon Government Complex in Gyeonggi reads “for rent.” Many shop owners complain of a drastic drop in sales after several government offices have relocated to Sejong City. By Choi Mo-ran


At around noon on Monday at Joongang-dong, Gwacheon, Gyeonggi, a delicious scent was emanating from the restaurants.

Though it was peak lunch time, it was hard to find a full restaurant or long lines. Many of the restaurants had several empty seats.

“Customers normally came 30 minutes before lunch time to find a seat and people used to wait for 20 to 30 minutes to be seated until last year,” a seolleongtang (ox bone soup) restaurant owner said.

Park said he had to fire half of his workers.

He isn’t the only one with a problem. Many government offices in the Gwacheon Government Complex that have occupied the space in Joongang and Byeolyang-dong in Gwacheon since 1982 have begun moving to Sejong City since January.

Businesses, including restaurants, bars and coffee shops, no longer have enough customers to stay profitable.

About 10,000 people, including civil servants and nearby residents, visited the government complex each day, according to the Gwacheon city government.

But the good times are over. Many government offices including the Ministry of Strategy and Finance, Ministry of Land, Transport and Maritime Affairs, and Ministry for Food, Agriculture, Forestry and Fisheries have moved to Sejong City starting in January.

Those office workers were loyal customers. According to the government, a total of 14 government offices and its affiliated agencies will have relocated to Sejong, including 4,000 to 5,000 officials, by the end of the year.

Some 2,200 officials have moved to Sejong as of now.

The street near the Grace Hotel in Byeolyang-dong used to be crowded with people hunting for taxis in the evening, but many taxis are empty and shops near the hotel close their doors in the early evening.

It said that 54 shops permanently shut down in the last three months, restaurants accounting for 30 of those. There are about 390 restaurants in the area.

“This is worse than the IMF crisis,” said Park Soo-cheol, director of the Gwacheon branch of the Korea Food Tourism Association.

The real estate economy is getting worse in the area as well.

The city government said the price of an apartment in the area has fallen an average of 15 percent since the moving plan for the Sejong City was announced in August 2010.

“We have sellers, but we don’t have buyers,” Kim In-young, a real estate agent, said.

As a measure to prevent the city from such economic problems, the government planned to bring in 14 government offices, including the Korea Communications Commission and the National Science and Technology Commission. But the problem is that the process takes about a year to allow for refurbishing.

“[The merchants] are seriously affected in just two to three months if they don’t attract enough customers,” a spokesman for the city government said.

“We currently offer discounts for using public parking lots during lunch and dinner hours as a measure, but if this condition continues, it will destroy the local economy.”

The Gyeonggi Provincial Government recently requested President-elect Park Geun-hye’s transition team to send the Ministry of Future Planning and Science, which is expected to be the largest government office in Park’s administration with 900 officials, to Gwacheon.

“The planning ministry should be housed in Gwacheon for its economy around the area,” Gyeonggi Gov. Kim Moon-soo said.

“Gwacheon is a good place from which people can easily reach new towns of Seongnam, Anyang and Gwanggyo, Gyeonggi.”